Review | When I Was Invisible ~ Dorothy Koomson 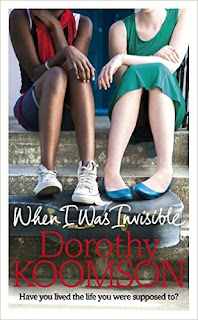 In 1988, two girls with identical names and the same love of ballet meet for the first time. They seem destined to be best friends forever and to become professional dancers.
Years later, however, they have both been dealt so many cruel and unexpected blows that they walk away from each other into very different futures - one enters a convent, the other becomes a minor celebrity.

Will these new, "invisible" lives be the ones they were meant to live, or will they only find that kind of salvations when they are reunited twenty years later?

Veronica Harper and Veronika Harper, Roni and Nika respectively, met at school and then joined the same ballet class, we are thrown right into this innocent world of big dreams, love and friendship at the start of the novel.

Very quickly it becomes clear that something happened between the girls in their teens that pushed them apart, right up until the end of the book although I had my suspicions, we were never really told and even then there was more going on that we were lead to believe.

The book alternates between both Roni and Nika, although I felt Nika had a much bigger storyline, and within their narratives we were thrown between the present day, their childhood/teens and what happened in the many years that passed.

This is my first novel by Dorothy Koomson, and although there was one bit in the middle where I felt like I was re-reading the complete first half of the book, as a whole - it had me gripped, Dorothy has a wonderful way of story telling despite some of the plot lines being very raw and dark.

When I Was Invisible was powerful and captivating, telling a story of two girls with history - I was eager to find out how Roni became a Nun and Sister and how Nika ended up being a celebrity who disappeared with no trace - and how they deal with consequences of their past to move forward with their future.

I would like to thank
LoveReading & Cornerstone
for providing a copy of
When I Was Invisible
in exchange for my honest opinion.