Review | My Map Of You ~ Isabelle Broom 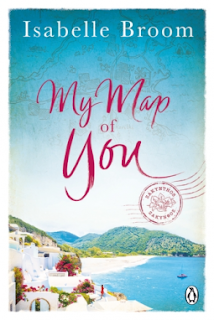 Holly Wright has had a difficult few years. After her mother's death, she's become expert at keeping people at a distance - including her boyfriend, Rupert.But when Holly receives an unexpected letter explaining that an aunt she never met has left her a house on the Greek island of Zakynthos, the walls she has built begin to crumble. Arriving on the island, Holly meets the handsome Aidan and slowly begins to uncover the truth about the secret which tore her family apart. But is the island where Holly really belongs? Or will her real life catch up with her first?

My Map Of You is Isabelle Broom's début novel under Michael Joseph and as soon as I heard about it I knew I just had to read it. When I got the email to say I'd been approved for an advance copy I was so excited I even dropped my phone....

The book I was reading took a back seat and I delved straight into the world of Holly Wright, the main character of this story.

Holly has had a bit of a tough life, after losing her mum in the most awful of ways it's safe to say she has built walls up around her made from steel... the "Insomnia Troll" is her best friend, she's in a mundane job and had a boyfriend, Rupert, who came across as a bit of a snob and I took an instant dislike to him.

Out of the blue she receives a letter stating an aunt she's never met has left her a home on the Greek Island of Zakynthos.
Flying out to take care of things, Holly's life changes in the most unexpected of ways. She finds an map drawn by her mum and aunt when they were little and decides to visit all of the places marked to try and piece together this unanswered questions. .. why did she not know about her aunt? Why was her aunt sorry? And why does she suddenly have de ja vu of being here before mixed with the feelings of suddenly belonging somewhere?

With the help of her rugged but sexy neighbour, Aiden ( I loved Aiden!!) Holly ticks off place by place on the map all the while getting closer to Aiden and further from Rupert.
Around Aiden, Holly can be her self and for the first time ever opens up about the truth surrounding her mother's death.

But all isn't as it seems when she's betrayed by him and leaves the island to make a life with Rupert.


By this point I had my fist in my mouth, I loved Holly's character from the moment I started the book and really felt for her so when she chose Rupert over Aiden I couldn't believe what I was reading - she'd come so far as a character and I felt like she arrived from London a lost girl but Greece progressed her into a strong, confident woman.

Of course with any good romance story it didn't end there... I won't give it all a way but I was secretly pleased with the way Isabelle wrote the ending and kept me on my toes of the final out come.

The love triangle is only one element of this book though. Fundamentally, Holly wants to know why her mum never mentioned she had a sister and discover the truth about her childhood.
There is also an elements where there book looks at secrets and betrayal and how we act on promises to others without seriously thinking of consequences, and who may get hurt in the process. It was a real humbling read to really make you think.

It's clear that Isabelle Broom has a love of the Greek Islands and My Map Of You was deliciously descriptive - I've never been to Greece but reading the details of the food, the landscape, the turtles and culture I felt I was there, living the story with Holly and Aiden. Did I mention I loved Aiden? Everyone needs some Aiden in their lives... ;-)

For a début novel, My Map Of You ticked all the boxes for me, there were parts I grinned at, parts I cringed at, parts where the words gave me such a feeling of urgency that I felt my reading pace speed up yet at other times I breezed along as if strolling one of the mentioned beaches and of course parts I simply had that 'ahh' moment to..  the epilogue was just perfect and rounded the story off just as  beautifully as the prologue introduced us.

Isabelle Broom has a bright future ahead and if her writing continues like this I would certainly pop her into the Giovanna Fletcher / Jill Mansell / Paige Toon / Books that make you happy category!!

My Map Of You gets a massively deserved 5 flowers rating!

I would like to thank the publishers, Michael Joseph & NetGalley for supplying a review copy.
This is my honest opinion.