I'm delighted to be kicking off the blog tour for One Moment at Sunrise by Karen Aldous, and what better way to start than with a gorgeous snippet from the book!
Thanks to Neverland Blog Tours for allowing me to take part. 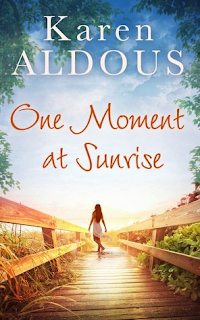 Escape to the south of France with the irresistibly compelling new story from Karen Aldous – the only book you’ll need this summer!

Nothing will ever be the same again…

Evie Grant has spent two years hidden away in a quiet French village, longing to escape her beautiful villa with its blue-shuttered windows. Maybe this summer, the father of her child will keep his broken promises and return to whisk her away to another life. One way or another, Evie’s determined to stop feeling like his dirty little secret…

Yet when a mysterious stranger almost knocks Evie off her bicycle early one morning, her world begins to change in ways she never expected. Embarking on a painful journey of self-discovery, Evie begins to face her darkest fears and shatter her fragile dreams. But can she ever truly break free from her gilded cage and learn to love again? 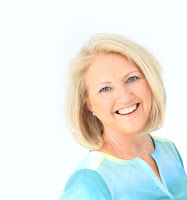 Karen Aldous enjoys village life on the edge of the north-downs in Kent with easy access to the buzz of London. Not only does she love the passive pleasures of reading and writing, she also craves the more active pursuits with her family and friends such as walking, cycling and skiing especially when they involve food and wine!

Karen gets much of her inspiration from her travels and if she had to choose, France, Greece, Switzerland, Italy and the USA would be her favourites. However, wherever she goes, she discovers a new character emerges in 'Karen's World'. She likes to write about strong independent women who can direct their own lives - but struggle to control them! And, of course there's always a gorgeous hunk or two!

Extract from One Moment at Sunrise

Crashing past overhanging shrubs the following morning, Ben drove along the bumpy track to

the gates where he had dropped Evie off. Out of the car, he peered through the tall iron gates

facing the substantial two-storey villa with shutters drawn and little sign of anyone home.

Checking the area around the gates, he located a bell and pushed it twice. As anticipated, there

was no response. Back in the car, he grabbed his pad from the passenger seat and scribbled down

a note asking her to call him with a suitable time to deliver her bike. He padded back over to the

gates and searched for a letterbox or somewhere she would see the note. It was then he heard

voices. Turning, he saw Evie pull a gate closed across the track, wheeling a buggy towards him.

With her hair blowing in the breeze, and her glowing complexion, his pulse increased. What he

saw was even more beautiful than he remembered. As she neared, he clenched each palm, one of

them containing the note. He slid it into his pocket.

‘Hi,’ he said, feeling himself drawn to the shimmer of her eyes. ‘You look amazing. How do

‘Yes, good. Grateful to be alive, as you can imagine.’

‘Good stuff.’ He knelt down to the buggy. ‘Charlotte, I presume. A beauty like her mother.

The little girl backed away, eyeing him with suspicion. She held her lips between her fingers.

‘If you’re wondering if I’m going to sue you, then don’t worry. You don’t have to be nice on

account of me causing trouble.’ Evie said, catching him by surprise. He remained crouched as

she continued. ‘Let’s just say we all had a lucky escape. As long as your people make more

effort to cordon areas off, to be absolute certain no one is allowed to wander. I won’t make

trouble. I take it that’s why you are here?’

Ben stood up and faced her. ‘Believe me, we won’t take any chances. I had nightmares last

night thinking about what could have happened, and I wouldn’t blame you if you wished to

pursue a claim.’ He held out a concerned palm. ‘I was told a sign was in place but it evidently

wasn’t visible enough, so we are responsible. I’ve brought you a form to fill in to claim any

‘No. I just want to erase the whole incident.’

‘Your call.’ Ben stepped back towards the car. ‘And... I’ve brought this. I could have had it

delivered I suppose, but I have a new bike for you. I’m afraid your bike was beyond repair. The

chassis was weak and deemed unsafe.’

Ben scratched his collar. ‘Well, yes. You said you couldn’t manage without one, and I did try

to get it to you yesterday but they had to build it. I’ve just collected it. It will need tightening in a

few weeks, or before if you use it frequently.’

She held her lip. ‘Oh, Jesus. This is embarrassing.’

‘My other one wasn’t even brand new when I had it. You didn’t have to. You could have just

got a second-hand one.’

Ben grinned. ‘I’m so sorry. If you don’t like it, I can return it and get something you would

Feeling touched by her concern for his spending, he reached out to the back of his hire car

and opened the rear.

‘Take a look.’ He reached up and heaved the heavy frame out, bouncing the sparkling new

‘It’s a hybrid, like your other one, so it can be used on most terrain. Try it for height.’

Evie stepped away, pushing the pushchair in front of her. ‘No. I can’t accept this. It’s...’

‘Of course you can,’ Ben cut in ‘to be honest, I’m more than pleased I can do something for

you. I feel terrible after what happened. Please, try it. I can adjust the saddle if it isn’t right.’

Clutching both hands, he raised his brows for a response. He was sure he’d done the right

thing and the last thing he wanted to do was upset her. It wasn’t only that the whole film would

be in jeopardy if they were sued, he also hated to see women upset. You can’t change who you

are, he reminded himself. That’s what his sister, Hannah, told him when he raced to her side if

she cried or had been troubled. His sisters often took his side. There were five years between him

and Hannah. Both she and his eldest sister, Nicola, seven years his senior, were the sweetest.

They argued among themselves at times but were just like mini-mummies’ to him, and he’d

always felt torn if he had to take sides when the pair of them were in dispute, or if they argued

with their mother. They would also protect him from his elder brother too, who constantly jibed

him about his dyslexia. He now wondered if his sisters’ closer bond with him was the root cause

of his brother’s attention-seeking behaviour. Anyway, this girl was far too wonderful to upset

and he needed to change tack.

‘Ok. Perhaps it would be better if you tell me what you want?’

‘I thought you were going to fix my bike, not... not bring me a brand new one. That’s all. I

feel it’s too much.’

‘Well, I can’t change the facts. The bike wasn’t fixable and I couldn’t see any second-hand

bikes where I was, so I got the next best thing. I promise you, I chose this because it resembled

everything about your old one – the size, the colour, the gears, the saddle, even the height should

match yours. It wasn’t expensive if that’s what you’re worried about. Try it out before you

decide. You definitely can’t ride your old one.’

She looked down at the buggy and turned it around, shading the girl from the full sun, then

gazed up to him, her eyes bright but suspicious.

‘I’ll give it a go along the track,’ she relented and pressed the brake down on the buggy.

‘Erm, I’m now going to offend you but can I take your car keys with me? I’m just not happy

leaving you with Charlotte.’

Ben sucked in his amusement but she was quite serious. Instead he smiled. ‘Yes, of course.

Chain her to the gate if you want or would you prefer me to go?’

‘No. Just your keys.’ She held out her hand.

Ben reached into his pocket. He shut his rear door before clicking it locked. ‘Here.’ He

pressed the keys into her hands, passed her the bike and stepped back against the car, not daring

to touch the buggy. She swung her leg over the saddle and rode off. He scratched his head,

feeling he should say something to little Charlotte whose mummy was cycling away, but he kept

Charlotte threw herself forward in her pram. ‘I want Mummy,’ she urged in panic

Ben scratched his neck and looked around him, hoping no witnesses could hear and accuse

him of terrorising the child.

‘Mummy,’ she called. Evie was now at the other end of the track and turning back. She

He knelt down beside her. ‘Mummy waving. Wave to Mummy,’ Ben told her and

demonstrated by waving his hand in the air. ‘Mummy coming.’

It seemed to do the trick and the little girl’s expression transformed to a smile. Evie gathered

Ben breathed a big sigh as Evie slowed and squeaked the brakes a few feet away.

‘Thank you. Do you need a spanner?’

Evie twisted her mouth with a wry grin and delved into her pocket. ‘Just a precautionary

thing, you understand,’ she said, passing them into his hand.

Ben scrambled into the back of his car while Evie inspected the detail on the bike. He

couldn’t help grinning to himself at her quirkiness. He found her so endearing; worrying about a

replacement bike, for goodness’ sake. She didn’t seem ungrateful, more suspicious about his

motives maybe, and, rightly so, very protective towards her child. He was pleased she had finally

research. He was so enthused by her peasant girls and eager to know more.

‘Oh, sweetheart. Yes. You can come out.’ Evie told her child, unclipping her from the buggy.

‘We can have a little ride in a minute. We’ll pop down and see what Monsieur Fish has for us

Swinging around while unwrapping the polythene wrapping on the child seat, Ben seized his