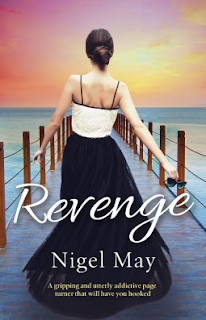 If you keep dangerous secrets you’ll pay the ultimate price…In the South of France, playground of the rich and famous, world renowned chef Dexter Franklin is organising a night to remember. As he opens the doors to his exclusive restaurant for the first time, he’s handpicked a list of guests, as hot and dazzling as the St Tropez sun itself:Mew Stanton: Fashionable, beautiful and a notorious TV chef, Dexter’s ex-girlfriend has all the ingredients for success. As her books fly off the shelves, a secret from her past is about to surface with explosive consequences. Holly Lydon: Ex girlband star who has fallen on hard times. Forced to make ends meet she’s having to sleep her way to the top. Now she’s making headlines for all the wrong reasons.Rosita Velázquez: Brazilian actress extraordinaire and girlfriend of Dexter’s brother, Leland. When she’s in town everybody needs to know about it, but this is one show-stopping entrance she’ll live to regret.Three women have a past with Dexter and a grudge to bear against him. As fireworks ignite in the jet set capital of Europe, there’s murder on the menu. Who will be served their just desserts?The sun is setting in the South of France. Pour yourself a glass of champagne and sit back for a read of revenge, regrets and shocking revelations that will have you hooked to the very last page.

Over the last year or so, I've become a huge fan of Nigel May's work so I was eager to get stuck in to his sixth novel Revenge, and I was certainly not disappointed.

There is so much written within the pages of Revenge that I fear that if I start going into characters and scenarios too much I will give away far more than I intend, so for that reason I apologise if this review is a little vague - please just trust me when I say it is a must read!

As the title may suggest, the book is primarily about Revenge, but I also found that there was a line of friendship, belonging and love within its depths too.

The novel then moves forth and is based in the idyllic setting of St Tropez, where celebrity chef Dexter Franklin is about to launch his latest swanky restaurant.

The first few chapters were brilliant, each one focused on a character, giving us a taste of their personality and careers. Each of the chapters also started with an invite from Dexter to the opening.

Other than Dexter the main characters are Mew and Holly - ex member of a successful girl band whom haven't spoken a word to each other since the day the band split, and Leland and Rosita, Dexter's brother and ex-lover respectively.
There's also some smaller characters, Dexter and Mew's publicist Olivia and food critic DC Riding to name a few.

All have a significant connection to Dexter and are wondering why they have been invited, because let's face it, their relationships haven't all gone smoothly with him.

As the group are treated to a glorious stay in a top notch St Tropez hotel their stories unfold deeper and darker. Nigel May has a great way with words making you feel like your right there in the thick of the action and the exotic locations that he throws back to when the characters are remembering times they've been together in the past are described as gloriously as the next.

For me, there was a couple of chapters in the middle that I felt the book got a little lost with, I was eager to get to Dexter's opening night as I wanted to know why he had hand selected these few people and of course to know who the murderer was - although I did have my suspicions and guess correctly at about 80% of the way through - and so I felt that the details in those odd chapters could have been added together, or maybe that's my impatience showing, haha!

Once the opening night had arrived, it all became clear as to why the chosen characters where there and this had a few surprises thrown into the mix to keep it entertaining.

Overall the book is brilliantly written with the glitz, glam, scandal and sex that we come to love from Nigel May, but as I mentioned at the beginning, Revenge wasn't all about its namesake for me.

Once everything had been revealed there were moments of mutual understanding between certain characters, whilst new relationships formed and existing ones now amicable between others.

Sadly Revenge is the last book from Nigel with his publishers in the glam - fiction category, but I can't wait to see what he comes up with in the future and wish him every success.

Thanks to Bookouture for a review copy via Netgalley.

Blog Tour ~ Extract and Giveaway | Who's That Girl ~ Mhairi McFarlane

I'm delighted to be kicking of the blog tour to celebrate the paperback release of Mhairi McFarlane's fabulous novel, Who's That Girl?

And what better way to start a blog tour than by giving you a chance to win your own copy!

Below I have all the details of the book for you and the gorgeous new paperback cover, plus a little extract teaser and then finally the giveaway details - so please ensure you read right to the end! 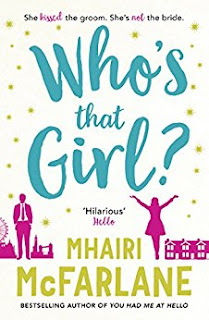 She kissed the groom. She’s not the bride…
Edie thought she’d found The One…until he told her he was marrying someone else. And on the day of his wedding, when he kisses her, life really does go pear-shaped…
Labelled as a home-wrecker and office outcast, when her boss offers her the chance to get out of town Edie jumps at it, even though moving back in with her eccentric father and prickly sister isn’t exactly the escape she needs.
When her work throws her into the path of rising star and heartthrob Elliot, Edie is expecting a highly strung diva. But as their unexpected friendship develops, Elliot isn’t the only one in the spotlight…
Who’s that girl? Edie is ready to find out.

Life through a phone is a lie. Edie imagined the process like

a diagram from physics lessons, the one on that Pink Floyd

album cover – a beam of white light refracted in a prism,

splintering and fanning out as a rainbow.

I mean, how much artifice, she wondered, was crammed

into this one appealing photograph? She gazed at its seductive

fictions in the slightly greasy, warm slab of screen in her palm

as she queued at the hotel bar.

Activity in the room whirled around her, messy unkempt

sweaty reality, soundtracked by The Supremes ‘Where Did

Our Love Go?’ In this still life, everything was forever image

Untruth number one: she and Louis looked like they adored

each other’s company. In order to squeeze into the frame, Edie

had rested her head against his shoulder. She was coquettish,

wearing a mysterious smile. He was doing the self-satisfied,

slightly 007 quirk of the lip that conveyed hey life is great, no

They’d spent five hours as platonic plus ones – the wedding planner had demanded pairs, like Noah’s Ark – and now they

were grating on each other, in heat and booze and wedding

clothes with waistbands that had got tighter and tighter, as if

Edie’s heels had, like those high enough for special occa-
sions, moved from ‘wobbly and pinchy, but borderline tolerable’

given up her mermaid tail for size 4s and the love of a prince.

false lashes. You could glimpse the top half of her red dress,

Louis’s cheekbones were even more ‘killer in a Bret Easton

over who liked which one. Edie had eye bags, Louis objected

he looked gaunt, the expressions were slightly too studied,

the shadows had not fallen in their favour. OK, another, another!

Pose, click, flash. Half a dozen was the charm: they both looked

good, but not too much like they’d tried to look good.

(‘Why does everyone do that expression now, like you’re

sucking on a sour plum?’ Edie’s dad asked, last time she was

home. ‘To make yourself look thin and pouty, I suppose. But

you don’t look like that face you pull, in real life. How

with the brightness and contrast settings. ‘Now to filter

He selected ‘Amaro’, bathing them in a fairytale cloud of

lemonade fog. Complexions were perfected. The mood was

filmic and dreamy, you’d think it captured a perfect moment.

And then there was the caption. The biggest deception of

all. Louis tapped it out and hit ‘post.’ ‘Congratulations Jack &

Charlotte! Amazing day! So happy for you guys <3 #perfectcouple

agency, who’d all found elegant excuses not to travel from

be the least of our problems, Edie thought. They’d all done the

arithmetic with Louis, that if he slagged off everyone else to

you, he slagged you off, too.

And of course, Louis had not stopped grousing under his

someone’s big day was like making fun of the way they ate,

or the size of their ankles. Good people instinctively under-
stood it was not fair game.

I really thought Charlotte would go for something more clean,

on that gown’s a bit Pronuptia, isn’t it? Even women with taste

seems to lose the plot and go Disney disaster in a bridal salon. I

round the stems, like a bandaged stump! Once a WAG has done

something, it is DONE. And sorry, but I find a tanned bride vulgar.

Ugh, two sips of that Buck’s Fizz and it was into a plant pot. I

DJ, he’s about fifty in a blouson leather jacket, where did he get that

for the erection section. Why can’t weddings be more MODERN?

The lovely team at HarperCollins have kindly offered one reader of Lozza's Book Corner a sparkly new paperback version of Who's That Girl.

All you have to do is enter on the link below.

I shall leave the giveaway open until the end of the blog tour (schedule below - don't forget to check out the other fab bloggers!) and then pick one winner at random. 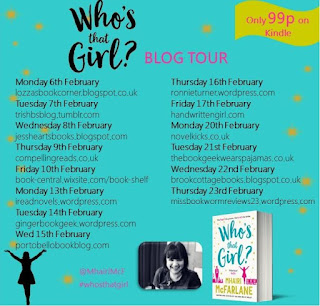