I'm delighted to be taking part in the blog tour for Rachael Feathstone's debut novel, Puzzle Girl, with not only a review below but Rachael has also kindly taken the time to provide us with an insight to her reading and writing space, 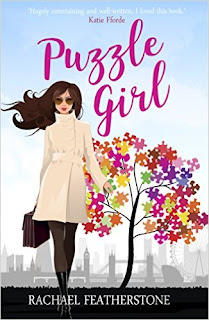 Love is a riddle waiting to be solved...

Clued-up career girl Cassy Brookes has life under control until one disastrous morning changes everything. When she finds herself stuck in a doctor s surgery, a cryptic message left in a crossword magazine sends her on a search to find the mysterious puzzle-man behind it.

Cassy is soon torn between tracking down her elusive dream guy, and outwitting her nightmare workmate, the devious Martin. Facing a puzzling love-life, will she ever be able to fit the  together and discover the truth behind this enigmatic man?

Puzzle Girl is one of them books that comes along and completely takes you by surprise.
The novel starts with an intriguing prologue that sets the story perfectly before really getting in to its groove in the first few chapters.

Cassy has everything planned out and is dedicated to her job, pushing for a promotion she sets out against her competition, Martin.
Only on the day of her presentation she ends up in the local medical centre where she finds a puzzle book whilst waiting. With all the puzzles filled out, Cassy starts her own leaving some cryptic clues, only to discover that it has been answered and correctly when she goes for a check up.
This starts a mission for her to find 'Puzzle-Man' but faces consequences along the way.

As Cassy's search becomes and obsession she starts to lose sight of what is really important in her life, not forgetting the crazy things she starts to do to beat Martin. It was great to read about a main character eventually realising her mistakes and seeing her turn her life around.

There where some great sub plots within the story, I loved Cassy's best friend Dan who is more like a brother to her. He was straight talking but had his own issues going on that Cassy failed to spot - even when he moved in with her!
The other sub plot was with Cassy's ex, Seph, and her colleague's boyfriend Joey.. I wont say anymore other than I had my suspicions quite early on and I was right!

One of the things I enjoyed the most about reading Puzzle Girl was the mix up of crosswords, emails and texts that where sporadically placed at the beginning and end of chapters... it gave a fresh look to reading by keeping it interesting.

Overall, Puzzle Girl was a great debut book. It was fast paced, fun and clever with a good cast of characters. The only thing for me that let the book own was that there was no epilogue - if your a follower of my blog and reviews then you will know this is something I enjoy reading as like to see what happens to the characters - or maybe I'm just nosy haha!

Tell us about your book corner/ writing space

It is probably true of both my “book corner” and my writing space that they are everywhere throughout my house. There are books in every room, we have two large bookcases – one in the hallway and one on the landing and then we have a whole wall of bookcases in our joint study. I love being surrounded by books and I think that is why I can write in any room in the house – it is very inspiring to be surrounded by words. When I’m writing a first draft I tend to mainly write at the dining room table.

Do you have a favourite shelf/collection of books? Or favourite part of your Book Corner?
In the bookcase on the landing I have a shelf which has all my favourite romantic comedy novels and women’s fiction. Sophie Kinsella, Dorothy Koomson, Elizabeth Noble and Cecelia Ahern. These are book I could read again and again.

Do you have any reading/writing habits?

I write in long bursts. Twelve hour plus days in which I can write up to 7,000 words. Then typically the next day, will be a rest day. I like to write a first draft on my laptop and then I print it out and edit by hand. When it comes to reading, it happens in bursts too. Partly because I don’t tend to read whilst I am writing a book so when I am in between drafts I binge read.

How do you keep apart, track and control your TBR to read books?

Very badly and I’m open to advice! I buy a lot of books that I had no intention of buying on random trips to the bookshop. I also buy a lot of kindle books based on recommendations I see on Twitter. So when it comes to deciding which book to read first I never know where to start. I usually select one at random that takes my fancy on that particular day.

Can you provide links to your social media handles please?

As part of the blog tour for Karen Clarke's The Beachside Sweet Shop, I'm delighted to be bringing you an exclusive read of Chapter One, with thanks to Kim at Bookouture. 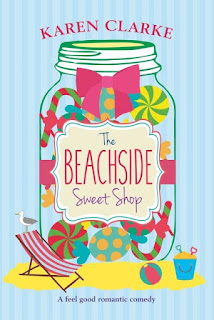 Chocolate fudge, butterscotch and raspberry bonbons… treat yourself to some sugary treats, a big slice of friendship and a sprinkling of romance at The Beachside Sweet Shop.

When Marnie Appleton inherited a sweet shop from her grandfather she was determined to do his legacy proud. The shop has been a much-loved feature of the little seaside town of Shipley for years, but now Marnie needs to bring it up to date, and she’s recruited gorgeous new assistant Josh to help.

Marnie gets busy redecorating the shop and choosing delicious new sweets to stock, but things are never that simple: new neighbour Isobel, a fame-hungry blogger, is on a crusade against sugar, and she’ll go to any lengths to secure bad publicity for Marnie’s shop.

Marnie fights back with homemade sugar-free treats, but with her best friend Beth heavily pregnant, her grandmother Celia recovering from an operation, and her very recently ex-boyfriend Alex returning to Shipley with a new love, Marnie has a lot on her plate.

And then there’s Josh, with whom Marnie is struggling to keep her relationship strictly professional…Will both the sweet shop and love flourish? 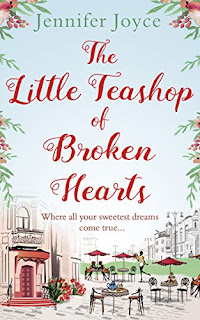 Maddie Lamington’s dreams are crumbling around her. If she doesn’t come up with a plan to save her little teashop on Sweet Street soon, it might be too late…
So when she sees how the perfect apple crumble brings together her lonely father and faithful customer Birdie, inspiration strikes: she’ll set up a dating night involving all her sweetest bakes.
Luckily, seriously gorgeous Caleb is on hand to help sprinkle a little magic – and a lot of sugar! Could one night of scrumptious first dates fix Maddie’s heartbreak and save her beloved teashop, too?

I was honoured to receive an advanced copy of Jennifer Joyce's new book, The Little Teashop of Broken Hearts - and to be offered a place on her blog tour.
I mean, just look how gorgeously inviting that cover is!

The Sweet Street teashop is owned by cake enthusiast, Maddie Lamington, who purchased the shop with inheritance money from her late grandmother, whom Maddie got her baking skills and passion from.

Quite early in to the story we know that Maddie had her heart broken by her ex Joel but we aren't told all the details until much later on. The other thing we know is that the teashop is financially struggling.

Mags and Victoria work at the shop with Maddie and are both also nursing heartbreak with Mags being divorced and unsure whether to let her self date again and Victoria being majorly let down by her ex boyfriend and bandmate.

The three girls have a great relationship which comes across well and you can feel how protective of each other they are. The are also protective of the shop and set about brainstorming ideas and ways to promote the teashop.
I'll add a disclosure here - this book will make you hungry and crave sweet treats and cakes - from simple cupcakes to rich cheesecakes, I wanted everything I was reading about and am sure I put on a few lbs just by reading about their deliciousness.

After several ideas flop, Maddie notices that her divorced Father and regular Friday customer Birdie, have a shared love of apple crumble and it is from that her idea of speed dating over cake forms.

Birdie volunteers her grandson Caleb, who in turns brings his reporter friend Neal for a trial night which works well and the teashop girls gear up for launch night - aided with Neal doing a promo piece for the local paper and slowly the trickle of new customers arrive.

But it isn't just the customers that start to arrive, the feelings of love start to form too between various characters of the book. Of course I'm not going to give it all away but they involve Maddie and Caleb to give you a taster.

The book is a great story of falling in love but there are a lot of miscommunication throughout which kept my interest in the story.

The Little Teashop of Broken Hearts is one of them stories where your reading of the words is a breeze. It was a gloriously simple book with a great bunch of characters and despite one or two mishaps along the way there was nothing too heavy within the plot that you had to think about, and after reading some deeper books of late, this was a very welcome change - definitely a book to read on a gloomy day to get you excited about Spring coming!