Second cover reveal of the bank holiday weekend from the lovely team at Avon... this one is super summery! 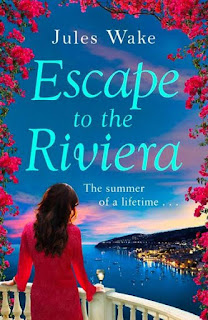 Some of you may have read Jules Wake before, and we’re delighted to be publishing her in paperback this summer! Also… THAT COVER. Can you even stop gazing at it? Me neither.

In St Tropez, anything can happen…

But Carrie’s life wasn’t always like this. As a young, wild drama student, she married fellow actor, Richard Maddox, after a whirlwind romance. Life back then was full of possibilities and when Hollywood beckoned, Richard followed, leaving her behind.

Now an A-list superstar, Richard’s life couldn’t be more different to Carrie’s, so when their paths cross in glamorous St Tropez, she can’t help but wonder what might have been.
But with lovely, sensible Alan in tow, Carrie knows she needs to do the right thing. The only problem is, Carrie and Richard never quite got round to getting a divorce…

Lose yourself this summer on the French Riviera – the perfect read for fans of Lucy Diamond and Jane Costello.