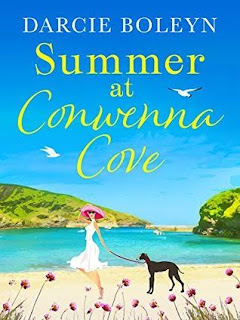 Eve has a glittering career, a loving husband and a future. But a terrible twist of fate
means she loses it all, and with nowhere left to turn she flees to her Aunt Mary’s
home in Cornwall. The last thing on her mind is romance – until she meets Jack.

Jack has seen the worst things people can do to each other and realised he is better
off alone. He settles in Conwenna Cove, and saves his affections for the rescue dogs
he cares for. But when Eve arrives in the village he can’t deny his attraction to her.

Eve and Jack are both scared to trust, but when they come together it’s impossible
for either to ignore their feelings. Can they put their fears aside and learn to love
again?

Summer at Conwenna Cove is an emotional and heart-warming holiday
read about being brave enough to take a chance on love.

When I was asked if I would like to read and review Summer at Conwenna Cove as part of Darcie Boleyn's blog tour, I jumped at the chance.

I've loved Darcie's novels but her first, Wish Upon A Christmas Cake, had something magical about it that I felt her subsequent novels didn't quite have, albeit they were still very enjoyable to read.

Summer at Conwenna Cove however, was demolished in one sitting. Right from the opening page I was gripped into Eve's life and wanted to just keep on reading.

Eve is troubled with guilt over her choices she has made and the stress of a fast paced career as a head teacher is starting to take its toll on her health. With encouragement from her friend and colleague, Amanda, Eve makes the decision to have some time out. After contacting her Aunt Mary, who she has been neglecting for a while, she makes the trip to Cornwall for some well deserved R&R.
Aunt Mary is delighted to have Eve back at Conwenna Cove, but her lodger isn't so sure.

Jack has built Eve up in his head to be some stuck up city girl who can't be bpothered to make time for her aunt, however when Eve arrives he is thrown and surprised not only by hoe fragile Eve is but by the feelings she stirs in the depths of his soul and ones he thought had been locked away for good.
I adored Jack, maybe because I am biased of the Royal Marines anyway, but the way he came across as a gentle giant certainly makes him a contender for 'book boyfriend of the summer' - everyone needs a Jack haha!

It quickly becomes clear that there are feelings between Eve and Jack but both are nursing wounds and with Eve unsure where her future lies, they have to tread carefully.

Darcie's writing style flowed effortlessly, there was an enjoyable cast of characters, setting that make you want to jet off to Cornwall and a story line that was was a mixture of deep feelings and light hearted moments.
I loved seeing Eve and Jack's relationship form, feeling characters fall in love as you read the words the author has written is one of the joys of romance books, but the supporting characters and their own stories were just as fab to read about.

For me, Summer at Conwenna Cove, had all the magic of Darcie's first story and I feel she is right back at the top of her game. Honestly, I could have read about Eve and Jack for a good few hours longer!

Darcie Boleyn has a huge heart and is a real softy.
She never fails to cry at books and movies, whether the ending
is happy or not.

Darcie is in possession of an overactive
imagination that often keeps her awake at night. Her
childhood dream was to become a Jedi but she hasn’t yet
found suitable transport to take her to a galaxy far, far
away.
She also has reservations about how she’d look in a
gold bikini, as she rather enjoys red wine, cheese and loves
anything with ginger or cherries in it – especially
chocolate.

Darcie fell in love in New York, got married in
the snow, rescues uncoordinated greyhounds and can
usually be found reading or typing away on her laptop.