Today I'm delighted to be sharing with you an extremely summery book cover from those cover reveal fairies at Avon... so without further ado... 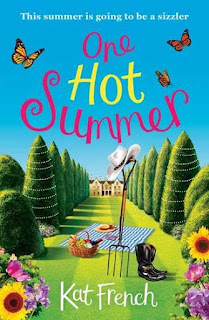 Being married to a celebrity isn't all it's cracked up to be, especially when that celebrity has a very public affair with his co-star…

Alice McBride is determined that the one thing she won't lose in her marriage breakup is Borne Manor, her beloved home, but she gets more than she bargained for when she rents it out for the summer and a sexy cowboy comes to stay.

Country music star Robinson Duff has had his own share of heartbreak and needs somewhere quiet to hide out for the summer. Neither Alice nor Robinson are in any position for romance; the timing is terrible and they're both rebounding like out of control frisbees.

Can a holiday romance help mend their broken hearts. Or will it just make things even worse when the long hot summer comes to its inevitable end?