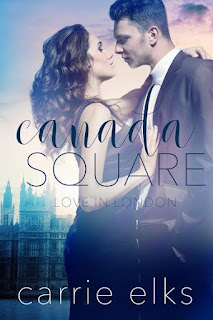 Secrets have a way of coming out…

Amy Cartwright isn't sure who she's supposed to be anymore. Her family thinks she's flighty, her ex believes she's a walkover (the bastard) and her friends think she's plain crazy. But there's a different side to her that nobody sees, nobody but the cool, sexy Scotsman who just happens to be her boss.

Callum Ferguson isn't looking for excitement; he's had that and it almost ruined him. He likes things calm and predictable – everything that his new PA turns out not to be. But from the moment she walks through his office door it's as though the light has come back into his life, and he can't get her out of his mind.

Fighting against the inevitable, they both try to ignore the attraction, but the flame of desire is too bright. They're soon drawn into a steamy love affair that they have to hide from everybody, knowing the revelation could cost them everything they’ve worked so hard for, including each other.

Author note: Canada Square is the third in the Love in London series, but can be read as a standalone book.

Canada Square is a little gem of a book and the first I've read from Carrie Elks. I started reading this last night when the insomnia kicked in and read right through until I'd finished it.

Amy Cartwright is the youngest of 3 siblings and so is often over protected, particularly by her brother Alex. She has an on- off boyfriend but when his latest lie comes along, something snaps. Amy decides she no longer wants to be the push over and ends it... determined to concentrate on gaining her degree she lands herself a rather tasty intern-ship and pushed her ex - and love, out of her mind.

When a mishap with her new job means she has to become a temp PA for a few weeks, the last thing on her mind is to form a relationship with her boss. Amy really comes into her self with Callum, I felt you see her progress from a girl to a woman quickly and although I could see where the story line was going, I wasn't expecting the twist of Callum's actions.

Alongside this, there is a sub plot involving Amy's past and the truth surrounding her Father - Amy has to question who she can trust and what she can believe over the coming weeks.

Carrie Elks has a great way with words, I found Canada Square fast past with the story moving forward rapidly yet flowingly. There are great set of characters supporting Amy and I'm keen to read the other two books in the series - especially Broken Chords which is book 2 and features Amy's brother and sister-in-law, Alex and Lara.

Overall, Canada Square is a gorgeous rollercoaster of a love story.

I would like to thank Carrie Elk's herself for supplying an ARC of
Canada Square (Love in London, 3)
in exchange for my honest opinion.