Yesterday saw the publication of Kayte Nunn's novel, Rose's Vintage and I'm delighted to be sharing with you today and exclusive excerpt from the book! 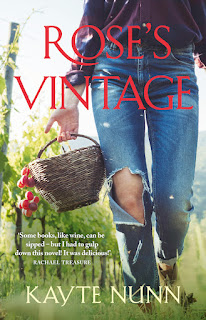 British blow-in, Rose Bennett, is heartbroken, overweight, irritable and a long way from home. She isn’t sure what exactly she’s doing at Kalkari Wines in the Australian Shingle Valley – it’s the middle of winter and far from the lush, romantic vineyard setting she’d been expecting.

Her brother thinks she’s spying for him, her bad-tempered new boss thinks she’s the au pair and the nanny can’t wait for her to clean the place up. Discovering pagan bonfire ceremonies, bizarre winemaking practices and a valley full of eccentric locals, Rose just wishes she’d ended up somewhere a bit warmer.
But as the weather improves, the valley reveals its beauty, and Rose starts to fall in love: with the valley, the wines, the two children she’s helping to look after, and one of the men there.

When her boss’s estranged wife returns and her brother descends, wanting answers, Rose is torn between staying put or cutting her losses.

If ever there was a place for the zombie apocalypse, this could be it, thought Rose, shivering in the chilly wind that felt like it had blown direct from Antarctica to the Shingle Valley. Parallel rows of bare, withered vines stretched across the landscape as far as the eye could see, stark against the washed-out grey sky, while in the distance the dark shadows of what she presumed must be the Shingle Hills loomed, looking very much like a giant’s crumpled, discarded handkerchief.

It was eerily quiet. The wind whipped her long dark hair around her face and she stamped her feet and flung her arms about her body in a vain attempt to bring some circulation back to her numb fingers. They had frozen into claws from being curled around the steering wheel of her little yellow car for hours. When she’d bought it in Sydney last week, she’d forgotten to check whether the heater worked.

That was her first mistake. Her second had been failing to pack anything approaching winter wear. She’d never imagined Australia would be this cold. This wasn’t the sunshine-and-board-shorts culture she’d been led to believe existed year-round in the land downunder. Home and Away had a lot to answer for. Her jeans, Birkenstocks and a t-shirt – even one with long sleeves – offered little protection against the freezing wind that cut clean to her bones.

A few minutes earlier, the car’s tyres had slipped in thick mud as she headed up the tree-lined dirt road, her head bumping uncomfortably on the roof of the tiny vehicle. It had been a long drive, but a straightforward one once she’d escaped the tentacles of the city and sailed north over the Harbour Bridge. She’d found Kalkari Wines easily enough, spotting the timber sign with the curlicued name embossed on it in black as she hurtled along the road heading out of Eumeralla, the small town that sat smack in the centre of the valley.

When Rose was a child, she and her brother Henry had played a game one day in the backyard, trying to dig a hole all the way to Australia. She had kept at it long after he lost interest, digging a crater so large it could have swallowed her whole. When their mum saw it, she blew her top and insisted they fill it in, chuntering that Rose had damaged the roots of her precious hydrangea bush, and that Rose could have buried herself alive. Rose remembered being indignant at the injustice of it; she’d worked hard at digging that hole. Now, she felt like she had kept on digging and had finally popped out the other side.

She mentally snapped the elastic on her big-girl panties, took a deep breath of the icy air and walked up to the cellar door, a low timber-and-stone building beside the public carpark. Behind it loomed a very large, industrial-looking shed with a corrugated roof. The sign next to the cellar door stated opening hours of 10 a.m. to 4 p.m. She looked at her watch. Just after eleven. She tried the handle. The door didn’t budge. Peering through the dusty glass, she could see a few wine barrels and a bar running the length of the room, but no signs of life.

To her right a lone magpie cawed mournfully. One for sorrow, thought Rose. She saw signs in everything: from bad news coming in threes to black-and-white birds foreshadowing doom. This wasn’t looking good.

Doing her best to ignore the magpie, which had cocked its head at her inquisitively, she headed to her left, leaving the carpark behind, and followed the other drive, marked ‘private’. As she rounded the bend, she came upon a house – and let out an involuntary gasp.
Even on such a gloomy day, it was an impressive sight: sandstone walls with huge rectangular windows were topped by a gabled dark shingle roof with chimneys at either end. A pair of grand sandstone columns flanked a vast iron-studded timber door, and the square front porch was bookended by a couple of straggly lavender bushes in tarnished copper urns.

As she looked at the house framed by the hills behind, Rose thought she’d never seen anything quite so intimidating or so beautiful in her life. She had a distinct feeling of déjà vu: that she’d it before, known it before . . .
Get a grip, girl!

Nerves were making Rose’s pulse race – she wasn’t used to subterfuge. That was all Henry’s doing. Feeling a little anxious and a lot like an intruder, she knocked timidly on the door.
And then knocked again, louder this time.

Getting no response, she walked around to the back of the house and found a wide verandah scattered with assorted kids’ paraphernalia: rusty bikes, a half-built Lego tower and an array of different-sized muddy boots, lined up from tiny to gargantuan. A few ruddy chickens scratched around in the dirt. Signs of life there at least.

‘Hallooo!’ Rose called out. ‘Hi there! Anyone home?’
Ain’t nobody here but us chickens.

Just then she heard the rumble of an engine and the scrunch of tyres on gravel. She hurried round to the front of the house again to see that a battered four-wheel drive had screeched to a halt at the front door, scattering gravel as it braked. Rose watched as a willowy, platinum-haired girl, who – with her puffy ski jacket and knitted beanie – wouldn’t have looked out of place on the slopes of St Moritz, climbed down from the front seat.
Close-up, she could see that the girl had the kind of peachy clear skin that looked as if it was lit from within and a small diamond piercing that twinkled in her nose. She looked all of about seventeen.
‘Hi,’ said Rose, ‘I– I wasn’t sure if anyone was home.’ The arse-freezing cold made her teeth chatter.
‘It’s okay,’ said the girl, pushing her fair hair behind her ears and looking down her pert little nose at Rose. ‘You must be the new au pair.’

‘That’s me,’ said Rose, not sounding particularly convincing even to her own ears. Until two weeks ago, she’d never imagined in her wildest nightmares that she’d be fronting up on the underside of the world, pretending to be an au pair in such a godforsaken place. She’d been, if not exactly happy, then at least in a comfortable groove, with a steady job, a flat and a boyfriend. Now she was completely cast adrift, cut off from all that she’d once thought was solid.
I can do this.

The girl looked at Rose with Teutonic directness in her clear blue eyes, and Rose nearly lost her nerve. ‘Good. The agency said they were sending someone. Mrs B’s back is very bad, and it’s bullshit crazy at the moment. You’d better come in,’ she said. ‘It’s a bit mad around here, and he is – how do you say? A moody bugger. But the kids are good. Well, most of the time.’ She opened the passenger door and began unbuckling a little girl, who looked about two years old. Rose glimpsed a cloud of dark hair escaping from beneath an apple-green fleecy hat.

Rose knew who ‘he’ was. Henry had briefed her in London. Mark Cameron. Founder and proprietor of Kalkari Wines. Thirty-eight years old. After a stellar career working for one of Australia’s biggest wine conglomerates, he’d turned his back on corporate life and chosen instead to risk his reputation and financial stability setting up Kalkari. He’d bought fifteen acres of run-down vineyards in the Shingle Valley about ten years ago, together with the imposing Kalkari House.
He’d added considerably to the original vineyards since then, and, according to what she’d read, now had some 160 acres under vine in the Shingle Valley. By all accounts he was just starting to turn the wines around, with his latest vintage getting some rave reviews from the press in Britain and America, as well as Australia.
Mark had a glamorous Spanish wife, Isabella, and they had a son, Leo. Henry had shown her a photo of Mark and Isabella pulled from the internet. They made a striking couple. Clearly Henry’s information was a tad out of date though, judging by the little girl in the car.

Kayte Nunn is a freelance book, magazine and web editor and writer with more than 20 years’ publishing experience and is the former editor of Gourmet Traveller WINE magazine. She is also a mother to two girls and when not writing, reading or ferrying her daughters around she can be found in the kitchen, procrasti-baking.

Rose’s Vintage is her first novel.