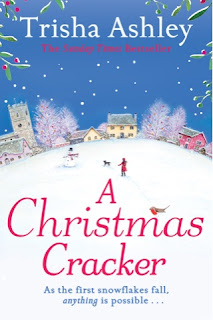 Get into the festive spirit with this heart-warming, funny and simply gorgeous Christmas read.

This Christmas is about to go off with a bang!

Things can’t possibly get worse for Tabby. Framed for her boss’s dodgy dealings, she’s landed up in prison. Then Tabby’s boyfriend dumps her and gives her cat away to a shelter.


But rescue comes in the form of Mercy. A master of saving waifs and strays, Mercy wants Tabby to breathe new flair into her ailing cracker business. Together, they’ll save Marwood’s Magical Christmas Crackers.


But someone’s not happy. Mercy’s nephew Randal thinks Tabby’s a fraudster. Stubborn, difficult and very attractive, her future depends upon winning him round. Standing under the mistletoe, Tabby’s Christmas is set to be one that she will never forget . .


Today is my stop on the blog tour for this fabulous festive read (updated 1830 - apologies for delay in posting and sharing, only just got wifi back today -nightmare!!)

I've read one or two of Trisha Ashley's books in the past and found them at times a slow and easy read, A Christmas Cracker is on a completely different league though  -even though during the first third of the book I thought I was going crackers - I'll explain as I go on...

A Christmas Cracker features Tabitha Coombs, or Tabby as she is known and starts off with her getting ready for her début exhibition- shes an artist, specialising in paper cutting but also in Christmas card design.
She's relying on the exhibition to do well as currently is in a mundane job packaging up champagne and chocolate gift sets, only her boss is passing cheap plonk off as the expensive stuff, and Tabby confides this in Kate, a friend of her fiancée.
During the exhibition we are also introduced to Charlie and Randal, Charlie works in TV exposing fraudsters and Randel looking into holiday hotels from hell.

The story moves swiftly on to Tabby not only being arrested for fraud but also being sent down. Whilst serving time at Her Majesties pleasure, Tabby is visited regularly by a prison friend who sets her up a meeting with Marcy Marwood, a generous lady and really loveable character and a do-gooder, who not only offers Tabby a job on her release but a home too.

Marcy lives at Moat Farm, where there is also a cracker factory, which is in dire need of a makeover and turnover. Her nephew wants to open it to the public as a tourist attraction and cafe but Marcy believes that the cracker factory should remain and enlists Tabby to help design and revamp this. Unbeknown to Tabby, the elusive nephew is none other than Randal!!

As the book evolves as does the cracker factory, you know when I said I was going crackers, well for a while, despite knowing this was a festive read, every time crackers was mentioned I had to question what they had to do with Christmas.... it was only when the cheesy cracker jokes started appearing that the penny dropped - ahh, I thought, pulling crackers not Jacobs!! (Other brands of course are available!!)

Blond moment over, the book was now in full flow of what was a really enjoyable Christmas story. There was lots going on, from the history of the Marwoods being Quakers, to Tabby's best friend being in an unhappy and emotionally abusive marriage, and Randal's soon to be wife having it off with Guy who was also flirting with Tabby!

I found the jokes got sillier and cheesier as the book went on, but that's how they are suppose to be isn't it? The characters were all likeable and relatable, even Randal who was a miserable Scrooge at times!

I would like to thank Avon for providing me with a NetGalley copy of the book in exchange for my honest opinion.