Excerpt: This Ones For You by Brandy Jellum

Today I'm pleased to be kicking off the blog tour for Brandy Jellum's novel, This Ones For You, and I'm delighted to bring you an excerpt from the book! 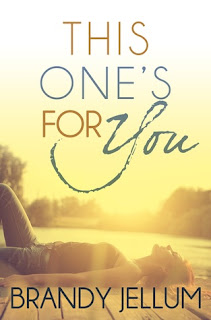 All alone in a new state, Brennan Daniels has only the memories of her best friend, Reagan, to keep her company as she starts college.
Reagan is the reason for everything Brennan does—before she died, she made Brennan promise to stay good until she found a man worth keeping. No boys, no dating, and definitely no falling in love—those were the rules for college, and Brennan carved them into the brick walls guarding her heart…
But there’s a fire burning behind those walls, and when Brennan meets Owen Scott, the (mysterious) new guy across the hall, she can’t deny the pull between them. He is everything she should never want. Everyone warns her to stay away—even Owen himself—but the heart wants what the heart wants, even if it knows that it’s going to get hurt—even if it means throwing old promises to new flames…

My body started to shake as the first tears streamed down my cheeks. I slid down to the floor, pulling my knees to my chest, and rocked back and forth. As more tears fell, my sobs became louder. Everything I had been holding in until that moment burst free from the dam I had carefully built.
Every emotion: anger, sadness, guilt, desperation, fear, anxiety, remorse, and rage overcame me in that single second. Everything I was afraid to let myself feel, I was feeling all at once. My body shook violently as the tears continued to stream down my face, and my throat was hoarse from crying.
It happened—I finally broke.
For the first time in almost a year, I let myself feel something—really feel something. The tears I had shed in the past were nothing compared to the ones I was crying now. The pain was unbearable. I wanted it to all go away. I wanted to rewind the clock just a little bit. I’d rather deal with my brothers acting like fools than to feel this.
This was the moment everyone close to me was waiting for, the moment when I finally let everything sink in. They were waiting for me to break. I was surprised it wasn’t sooner.
My sobs echoed the breaking of my heart. Speaking for the things I couldn’t say—the one thing I wanted to shout loud enough for everyone to hear; it wasn’t fair! Why was the most beautiful person I’d ever known stripped from this earth before it was her time?
Seeing Ronnie, hearing his plan, brought everything to the surface. Why couldn’t he stay away? Everyone was constantly pushing me, and this time they pushed me too far. I went right over the cliff, and there was no end in sight.
I barely heard the soft knock against the bathroom door over the sound of my own sobs. I held my breath, waiting to see if it was just my imagination, when there was another rap against the wooden door.
I heard a loud sigh and a soft thump against the sturdy wood. My chest heaved as I kept as quiet as I could, my face soaked with tears. I wiped at them furiously, trying to get them to stop. The more I fought against it, the faster they seemed to fall.
My mouth was dry. I licked my lips, tasting the saltiness of my broken heart.
“Brennan . . .” Owen said.
“I’ll be out in a moment.”
I bit my bottom lip. I had to get myself together. I needed to get up off the floor, put a smile on my face, and go on like nothing happened. There was a reason why it had taken so long for me to break—I kept pretending I was fine. It wasn’t healthy, but staying on the cold bathroom floor bawling wasn’t either.


I had to go back to the way I was prior to this. I had to grin it and bear it. Like nothing in the world could get me down. It was the only way I was going to survive.
Posted by Unknown at 07:00:00