Getting Over Jessie Franklin by Stephie Chapman

The review for Getting Over Jessie Franklin is brought to you by guest reviewer, Katrina 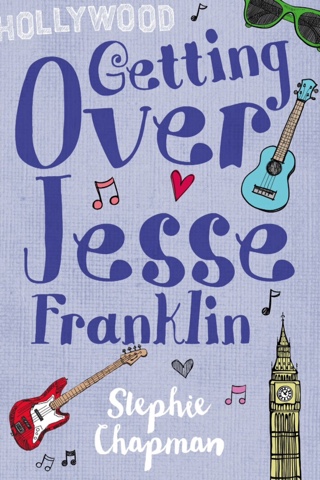 What happens when you find your 90's boyband crush on Facebook, and then add him?

Years ago, Cassie loved Jesse. But he was the bass player in her favourite band and didn't know she even existed.
Fourteen years on, the band has broken up and she's found him on Facebook, and it turns out that after finally meeting in London, he quite likes her, too.
Their relationship quickly intensifies and Cassie and Jesse find themselves in a long distance relationship spanning five thousand miles.
But just as she's beginning to think all her dreams have come true, a misunderstanding tears them apart and as she tries to piece her life back together in London, Jesse is planning a way to win her back with the help of her best friend... and a ukulele.

I stumbled across 'Getting Over Jesse Franklin' on Twitter from one of the many blogger RT accounts that I follow.  I read a review of this book which prompted me to download a copy immediately as it sounded right up my street!

As a fangirl of many bands over the years, I could immediately relate to the story - I mean who wouldn't want the chance to date their favourite pop star crush?! (Jay McGuiness, my door will always be open!!!). However the protagonist Cassie's dreams actually come true after she drunkenly adds her favourite ex-pop star Jesse Franklin on Facebook. Cassie expects nothing from it, however she is soon added back by Jesse and following an initial awkward conversation, the pair really hit it off!

What follows is Cassie and Jesse's intense and fast moving love story.  From their initial 'date' in London to Cassie's LA trip, we get to know all the details from their blossoming romance and extremely physical relationship. It's very interesting to see how the long distance relationship plays out.

I really enjoyed the style of writing and how Stephie told Cassie and Jesse's story.  The use of Facebook messages and texts were very effective within the book. I loved the characters, from the main couple to Cassie's best friend Rachel and flatmates Jon and Sara. Jesse is the ultimate heartthrob and has been written in a way that would make most women swoon.

I felt really involved within the story and would find myself getting so frustrated at some of the decisions made by certain characters. There is a perfect mix of humour, heartbreak and pop star lifestyle and the book is a real page turner.

Having said that, there are no big surprises in this book but that doesn't make it any less enjoyable.  The only criticism I have is that the blurb majorly hints at the plot line which is a shame.  In future I hope that Stephie puts less giveaways in the blurb, as it did take away from the ending for me.

Despite this, overall Geting Over Jesse Franklin is a fantastic first novel by Stephie and I can't wait to read more of her work in the future. It's a brilliant easy read in which most people can relate to the musical elements. Fingers crossed that Stephie will revisit Cassie and Jesse's story one day!