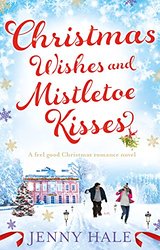 An uplifting, beautiful story about never letting go of your dreams, the special magic of a family Christmas… and the rush of falling in love under the mistletoe. Single mother Abbey Fuller loves her family more than anything, and doesn’t regret for a moment having had to put her dreams of being an interior designer on hold. But with her son, Max, growing up, when a friend recommends her for a small design job she jumps at the chance. How hard can it be? Nick Sinclair needs his house decorated in time for his family’s festive visit – and money is no object. What he doesn’t need is to be distracted from his multi-million dollar business – even if it is Christmas. When Abbey pulls up to the huge Sinclair mansion, she has a feeling she might be out of her depth. And when she meets the gorgeous, brooding Nicholas Sinclair, she knows that she’s in real trouble… With the snow falling all around, can Abbey take the chance to make her dreams of being a designer come true? And can she help Nick to finally enjoy the magic of Christmas?


This is the first book that I have read from Jenny Hale and quite honestly I loved everything about the book.

Abbey is a single mother to 6 year old Max, and this year her Christmas wish is to give Max all of the gifts on his letter to Santa as before now she's been unable to manage that and compared to his buddies he feels like he's on the naughty list.
As a qualified nurse, Abbey is a carer for Caroline and it is clear from the onset that they have a tight bond.
Abbey's passion though, is interior design and having already transformed Caroline's house, Abbey's story and the book starts with her going to a meeting with Caroline's Grandson, Nick.

Nick is a workaholic.Since his Fathers death and inheriting the family business he feels that he ows it to his Dad to make it a success. He doesn't know fun or how to relax, and since his ex wife left him and took most of the belongings, his mansion of a house feels cold and empty.
With his Mother, Sister and her family coming for Christmas, Caroline suggests that Nick hires Abbey to revamp his mansion.

With the offer of a substantial amount of money, Abbey takes on the challenge - she can give Max the Christmas kids dream of, and help with her Gramps' healthcare.

Abbey starts to not only warm the house with rich colour schemes but also decides to add a little festive cheer.
When Max is taken poorly he has to go with her and he immediately takes a shine to Nick. as the weeks pass leading to Nick's family arriving and his Christmas Eve party, not only does Abbey and him start to gain feelings for each other, Max and his innocence aids Nick to relax and enjoy himself a little - he just cant seem to concentrate on work or say no to an adorable 6 year old!

When Abbey realises she's fallen for Nick, he drops a bombshell that after Christmas he will be moving away to concentrate on his job more.

I was wondering where the title of the book came from as we only really knew Abbeys wish, but Max manages to convince Nick to come to 'bring dad to school day' and there the children and adults have to make a secret wish but its not really until the end of the book and the epilogue that we know what they have written.

For a while I wasn't sure how the ending was going to be. Despite Nick falling for Abbey he appeared determined to still move away and Abbey was against this as wanted to stay close to her family.

I fell for this Christmas storyline straight away, all of the characters were adorable and easy to like and the book was greatly detailed for the build up to the big day - buying trees, making decorations, visiting Santa - it was very relatable, yet was a complete page turner as you were 100% sure if Abbey and Nick would get together.

I wont give away the ending or many more details, but if you are after a warm, festive, heart warming story with genuinely nice characters and beautiful surroundings then this book is totally for you! When the characters laughed, I smiled. When the characters cried, I felt their emotion - it was brilliantly written!

I'm definitely going to be looking for more Jenny Hale books to get me in the festive spirit!

I would like to thank Bookouture and the author for a NetGalley copy of the book in return for honest opinion.

When she graduated college, one of Jenny’s friends said “Look out for this one; she’s going to be an author one day”. Despite being an avid reader and a natural storyteller, it wasn’t until that very moment that the idea of writing novels occurred to her.
Sometimes our friends can see the things that we can’t. Whilst she didn’t start straight away, that comment sowed a seed and several years, two children and hundreds of thousands of words later, Jenny finished her first novel – Coming Home for Christmas – which became an instant bestseller.
www.itsjennyhale.com

Giveaway!
Throughout the #BookoutureXmas event I am hosting the following giveaway - see below for your chance to win a Christmas bundle to start your festive reading off in style!