One Wish In Manhattan by Mandy Baggot 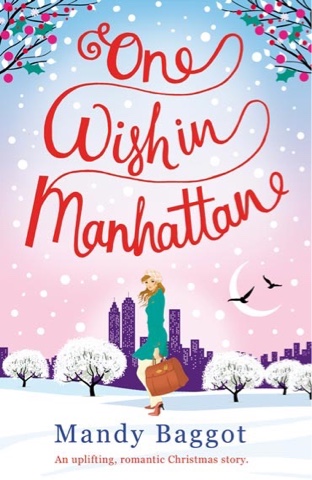 It’s the most wonderful time of the year . . . to fall in love
The temperature is dropping, snow is on its way and Hayley Walker is heading for New York with one wish on her mind…to start over.

With her nine year-old daughter Angel, Hayley is ready for an adventure. From hot chocolates and horse-drawn carriage rides in Central Park, to ice-skating at the Rockefeller Centre, and Christmas shopping on 5th Avenue – they soon fall in love with the city that never sleeps.

But there’s more to New York than the bright twinkly lights and breathtaking skyscrapers. Angel has a Christmas wish of her own – to find her real dad.

While Hayley tries to fufil her daughter’s wish, she crosses paths with billionaire Oliver Drummond. Restless and bored with fast living, there’s something intriguing about him that has Hayley hooked.

Determined to make her daughter’s dream come true, can Hayley dare to think her own dreams might turn into reality – could A New York Christmas turn into a New York Forever?

Travel to the Big Apple this Christmas and join Hayley and Oliver as they both realise that life isn’t just about filling the minutes…it’s about making every moment count.

I'm a little shocked with my self that I have never read a Mandy Baggot book before now... why I will never know because I have just finished reading One Wish In Manhattan and quite frankly it was blooming brilliant!

The book is based around the lives of Hayley Walker and her nine year old daughter, Angel, as well as taking a look at the life of American Billionaire, Oliver Drummond.

Hayley once had a dream. She has an eye for fashion and that is where her passion lies but as a result of a one night stand ten years ago whilst in New York, her plans, much to her mothers disgust, have been put on hold due to the arrival of Angel.
Angel's Christmas wish is to meet her Father and Hayley is determined to do just that, but online searching hasn't quite worked out for her. Hayley is pinning all her hopes on a trip to New York in hope of some leads, Angel on the other hand thinks the trip is just to visit and spend the festivities with Uncle Dean.

Oliver is a billionaire after inheriting his fathers business, yet something is missing in his life. He works all day and seeks out beautiful women in the evening by asking them their one wish and making it happen before bedding them... anything to take his mind of the death of his brother and dad and the family curse he is so convinced will end his life too.

Hayley and Oliver meet on her first night in NY when she helps him escape through a fire exit. There is an instant attraction and flirty banter. When he tries his usual line on Hayley she replies that her one wish would be to find Angel's dad.
Over time and a few run ins later, the pair spend more and more time together, all the while trying to fight their try feelings - Hayley because she has Angel to think about and is only in the country for a few weeks and Oliver because he believes he shouldn't get close to anyone as he will soon die!

Whilst the Hayley and Oliver will they wont they continues, we are introduced to other characters yet the saying "Its a small world" is true in this case.

Hayley applies for a small cleaning job whilst on holiday as Angel's sightseeing is costing her a fortune. The job doesn't go too well but she does gain an amazing opportunity from it when the lady she cleans for is no other than Cynthia Drummond, Oliver's mother, and is in desperate need for Hayley's help....
Oliver is launching a new tablet set to take over Apple and his top designer is Dean.. yeah Uncle Dean, Hayley's brother Dean... so you can see how the characters interlink.

My favourite character of the story was by far Angel, she's referred to as a walking encyclopaedia but the way everything was written, her one line answers and nature was completely relatable to any nine year old I know!

I know I've been completely vague with the details here but I can assure you that One Wish In Manhattan has everything you would want from a Christmas novel. It was warm and humbling, had me laughing at the conversations between Hayley and Angel, and brought tears to my eyes during the more serious parts around Oliver and his heart. There was snow, a lot of snow actually, and carols and New York was described well making you feel like you were there.

I enjoyed the style of the book, Jill Mansell is one of my favourite authors as I love the way she takes just a handful of characters and makes their paths cross and gives the story from both sides of the main ones, and I'm my opinion, Mandy did this equally well which made it a delight to read.

I will definitely be looking out for further books from Mandy Baggot if they are as sparkly as this one!

I would like to thank Bookouture and the author for a NetGalley copy of this book - this is my honest opinion.
I have read and reviewed this book as part of the publishers Christmas themed week - for more books & reviews, just follow @Bookouture on twitter and search #BookoutureXmas

Mandy Baggot is an award-winning author of romantic women’s fiction and a member of the Romantic Novelists’ Association.
A contributor to writing blogs and short story anthologies, she is also a regular speaker at literary festivals, events and women’s networking groups.
Mandy loves mashed potato, white wine, country music, Corfu and handbags.
She has appeared on ITV1’s Who Dares Sings and auditioned for The X-Factor and lives in Wiltshire, UK with her husband, two children and cats Kravitz and Springsteen.
www.mandybaggot.com