Today is my stop on the Make A Christmas Wish blog tour and I love, love, LOVED this book! Its quite unusual, will to me anyway, to have a story told by someone no longer with us so at time you have to keep an open mind, but that doesn't take away the brilliantness (is that a word? I'm making it one!) of the story.

Below you will not only find the usual blurb and my review, but I also have something super special too- an audio excerpt! 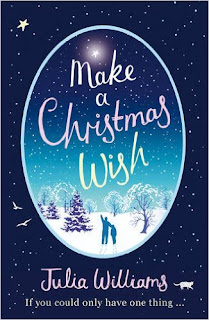 
And she’s not ready to go just yet! She’s furious about the new woman in her husband’s life and she’s worried about her beloved son who doesn’t seem to be adjusting to life without her at all.

When I first started reading Make A Christmas Wish, I wont lie to you, my first thought was "What on earth am I reading?" swiftly followed by "A Ghost? I'm reading a book from the prospective of a ghost?!"

OK, so that sounds a little strange, granted, but bare with me.... because what we actually have here is an incredibly well thought out Christmas novel that had me gasping in places and moved to tears at the end. If your happy to keep an open mind about ghost's and afterlife and remember this is a book of fiction then it really is a true work of art.

There are four main characters to the book - Livvy, Adam, Emily and Joe, and the book is told in the 1st person from Livvy and Adam, the 3rd person with Emily and notebook form from Joe so instantly we have a great variation of reading style which is well balanced, keeping the story flowing without getting confusing or lost.

Even though the bulk of the book is set in this year, it is split into three sections as there are odd chapters which in part one looks back on Christmas's from Livvy's past, section two remains as now whilst three takes a look at future Christmas's.

Now I appreciate that all this seems a lot to take in, but when your actually reading the book it flows perfectly, I don't want to give away too many details and spoil the plot but I will give a bit of a summary which will help explain the past and future sections to an extent.

Livvy is knocked down by a learner driver at her local supermarket just prior to Christmas last year, leaving behind her husband Adam and son, Joe. She is aware of things going on around her but cant quite work it all out. It all becomes clear when she overhears Adam and Joe being told that she didn't survive the accident.
After a year she is approached by her spirit guide, Malaki, who explains that she has been left where she passed away as she wasn't ready to go over to the other side.
Despite being dead, Livvy believes that its not her time to go and want to make it her mission to rebuild her family, especially as just before the car hit her she had discovered Adam had been having an affair with Emily.
Livvy hates Emily with a passion, but with her and Adam getting closer and closer, she decides drastic action is needed to drive the couple apart and make Adam fall in love with her again.
Only both Adam and Emily don't believe in ghost.
Livvy starts to play tricks on them - gusts of wind, flickering lights and frozen computer screens and soon enough they start to wonder what is happening.
Joe in the meantime knows its his mum doing this yet isn't believed, however is thrilled to have her back - He has Asperger's and puts things simply... Mums gone, Emily's here, she's my new mum, mums back, Emily must go.... he doesn't quite get the complications involved but knows that his one Christmas wish would be to have his family together again,  which puts pressure on Adam as he wants Joe to be happy which will only be if Livvy stays, but of course him and Emily will be unhappy... its a love triangle at its best!

Over time, Malaki shows Livvy snapshots from her past and how much of a drinking problem she had, one of the main reasons her and Adam's relationship wasn't working.
Livvy confides in another spirit guide who says she can help bring her back to life and gives her 24 hours to make Adam fall for her again, and its only when he sticks to his feelings for Emily that Livvy realises that maybe it was her time to pass, that maybe her relationship was over a long time ago.

But does she do the right thing and leave her son and the man she loves for a second time or does she continue to drive a wedge between Emily and Adam?

Well..... you will just have to read the book as if I type anymore I think I will give the complete story away, and I really don't think that my over view has done the book justice so you are just going to have to trust me on how fantastic it is!

This is the first book of Julia William's I've read and I can say I was not disappointed. The book was a complete page turner and had me gripped from start to finish.

There were bits that made me chuckle out loud (who knew life after death could be such a ball?!) and bits that were pulling the heart strings and the whole concept of the book with the main character being a ghost gave me a completely different prospective and really makes you think about loved ones that you've lost and the process of them passing over.

It also leaves one question - if you could Make A Christmas Wish, what would you choose?

Click here to listen to an exclusive audio clip taken from the book!

I would like to thank HarperCollins and Avon for a review copy of this book in return for my honest opinion.