After You by JoJo Moyes 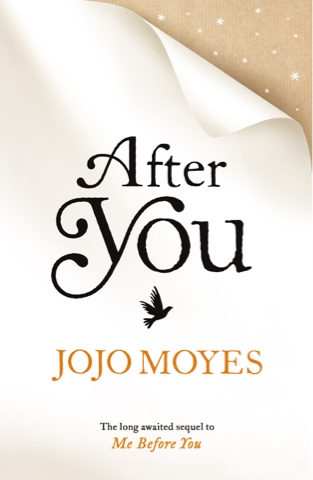 Lou Clark has lots of questions.

Like how is it she's ended up working in an airport bar, spending every shift watching other people jet off to new places.
Or why the flat she's owned for a year still doesn't feel like home.
Whether her close-knit family can forgive her for what she did eighteen months ago.
And will she ever get over the love of her life.
What Lou does know for certain is that something has to change.

Then, one night, it does.

But does the stranger on her doorstep hold the answers Lou is searching for- or just more questions?
Close the door and life continues: simple, ordered, safe.
Open it and she risks everything.

But Lou once made a promise to live. And if she's going to keep it, she has to invite them in...

Since reading Me Before You earlier this year (yes, yes I know I was late to the party!) I've raved about it to literally everyone I know... It was by far the best book I've read in a long time! If you've not read it, I absolutely urge you to!!

So then I hear that the brilliant JoJo Moyes is writing a sequel which immediately went on pre-order with my local Waterstones, whom in fact got their copies in a day before publication.... Well you can just imagine my excitement can't you?

After You, has been by my side since I picked it up... It's been to a funeral with me, to the hair dressers with me, on the train to London and back with me (yes that's when the tears first started!) and of course I've even shared my baths and bed with Lou Clark ;-)

I'll be completely honest, I, like the rest of the world, was completely and utterly devastated at Will's decision in MBY, and wondered what would happen to Lou in the days, weeks and months after. Of course, I didn't know what way JoJo would take her story and so I've pretty much avoided my Twitter feed to avoid spoilers.

What I hoped from After You, was a look into Lou Clarks life since Wilł's death... How she coped and moved on. In reality what we got was a story, as equally brilliant as MBY, but one that started 18months down the line, which is fine, totally fine as we really know much about the book or its direction. For me personally though, I would have liked a little more on the aftermath rather than the odd chapter, that said, the odd chapter worked perfectly for the way After You goes.... I shall try not to reveal too many spoilers in my review but I can't promise...!

We are re introduced to Louisa Clark working in a bar at the airport, it's a bit of a dead end job to be honest but I guess it makes her get out of bed daily!
We hear a little about her trip to Paris but primarily it's about Lou now.
I wouldn't say she's living in London, existing is more the correct words...and it's fairly clear that she's still vulnerable after losing Will. She's barely spoken to her parents or sister and has no idea what the Traynors are not up to.
She spends her time either cheering up miserable customers or drowning her sorrows with a bottle of wine on her private roof terrace... And it's there that she hears a voice that will change her life.
Unfortunately she topples and falls landing herself in hospital which although is not an ideal situation, it's is a perfect way for her and her parents to build some bridges as she moves back home to recover.

When she returns home, well you can hardly call her flat home as everything is still in boxes, her parents insist she deals with things and she joins the Moving On Group. Slowly over time the people in the group all share their stories of love and understand each other's grief... And gradually become Louisa's friends.
It is there that she also meets Sam, or Ambulance Sam as he's known. He's the uncle to one of the Moving On Group members and was there when she fell. Lou being the lovely but oh so delicate soul that she is jumps to conclusions about Sam and they have a bit of a rocky relationship to start with, that said I think he was her rock over Lily.

Lily was by far my favourite new character of the story. She is everything a teenage girl should be... Grumpy, moody, emotional, out going and stubborn. As I've already mentioned, we had no clue to which direction After You would go in but I was not expecting Lily to be who she is and when I read the lines I literally sat there staring for ages processing the words I'd just read!
Lou and Lily's relationship reminded me of Lou and Will... Lou was very patient, understanding and a complete worrier and it took a while for her to break Lily and to get her to open up and soften, just as it had with Will.

When Lou gets an amazing opportunity thrown her way she is undecided what to do, she feels that she is needed through the trying times Lily is having, plus she's having amazing sex with Ambulance Sam. On the other hand she made a promise to Will to live her life fully.
In true Louisa style, she declines the offer much to her sisters disgust (some characters never change eh?!) and concentrates on her life in London- not an easy task in her world, but gradually she finds that confidence we all loved from her character, she gains new friends and starts to build her life.

Will is never far from her mind though and she is often wondering what he would say or do in many situations and with that in mind, along with the promise she made him she goes after that missed opportunity.

What I loved about this book was everything really. JoJo has an amazing ability to write making you laugh out loud on one page and then get completely chocked up on the next.
I loved the references to Me Before You such as the bumble bee tights and the memory of her and Will gate crashing his ex's wedding dance.
I enjoyed how the characters had moved on on what would and could be realistic scenarios - Mr Traynor and Della in their relationship, Nathan in his new job etc

What I missed from the first book though, was the odd chapters from various characters points of view. In MBY there was a chapter from Will's mum, Nathan and Treena where as in After You there is only one other, from Lily, and I think it would be good to have a snippet from the others too.
But that's all I could find fault with... So all in all a pretty darn good book.

Me Before You I think will always have the edge over any sequel for me, but that's just a personal opinion. After You had everything you could want in a book... Laughter, smiles, tears and shock... A complete page turner.

I can't help thinking this isn't the end for Lou and her story. After You ends with her and Ambulance Sam agreeing to "live life" and give a relationship ago, yet she's about to board a plane for the job and adventure of a life time.
I've got so many questions for JoJo Moyes- is Sam Lou's happy ever after? How will she cope working with Nathan again? What's next for her and Lily?