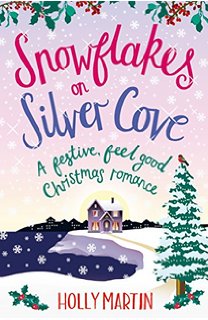 Libby Joseph is famous for her romantic Christmas stories. Every December, readers devour her books of falling in love against the magical backdrop of the Christmas season. If only Libby believed in the magic herself…

Struggling to finish her current novel, Libby turns to her best friend and neighbour George Donaldson to cheer her up. But George also needs a bit of support himself. Nervous about getting back into the dating saddle after splitting from his wife, he and Libby strike a deal. She will teach George how to win over the ladies, and Libby will in turn be inspired to inject her novel with a good dose of romance.

As Libby and George explore the beautiful White Cliff Bay on a series of romantic Christmas-themed dates, Libby finds herself having more fun than she’s had in ages and…discovers feelings that she never knew she had for George.

But is it too late? Will George win someone else’s heart or can Libby act like the heroine in one of her stories and reach for her own love under the mistletoe this Christmas?

Holly Martin has done it again, not only has she written one fabulous Christmas book this year, she's actually treating us to two!

Snowflakes on Silver Cove is the second book in her White Cliff Bay series, the first being Christmas At Lilac Cottage - read my review here!

As with Christmas at Lilac Cottage, Snowflakes on Silver Cove can be read as a standalone book, however, I personally prefer to read in sequence and I do think that your experience will be inharnced if you do, particually in this series as there are little things that happen in which you can think back and cross reference... Its a nice touch.

Where as Christmas At Lilac Cottage is based completely around Penny and Henry's story, in Snowflakes on Silver Cove we have two main characters, Libby and George, and two sub characters,  Seb and Amy. .. plus a few names mentioned in both books.

Libby is a successful writer who is struggling with her latest book. Since the death of her mother she's moved from place to place staying no longer than a few months and not committing to any real friendships. She arrived in Silver Cove six months ago and with Christmas just days away shes at a loss with her writing process and undecided on whether to move on.

George, is Libby's best buddy and neighbour is also at a bit of a loss, only in the relationship department. He's madly in love with Libby yet decides with her moving on its best if he pushed those feelings aside and concentrates on getting back in the dating game. He comes up with a plan in which he hopes will benefit them both - pretend dates.

As Libby and George go on a series of these pretend dates, the plan being a little romance with spark her writing again and boost his confidence, Libby starts to feel feelings for him that is more than just good friends.
Its clear to their circle of buddies that both have feelings for each other yet its not clear to them. As Christmas Eve draws closer, George goes on an actual real date and Libby gets jealous - will they come clean on their feelings for each other before its too late and Libby leaves?

Meanwhile, the other couple, Seb and Amy, have no qualms with making their feelings clear.

Seb is the local landlord and has been widowed for the last 5 years. He has feelings for Amy but feels guilty acting on them out of respect and a promise he made to his mother in law - that he would never love again. Amy is loud and colourful, everything his late wife wasnt and when his mother in law catches them kissing all hell breaks loose - Can he battle his guilt and be happy again?

What I loved about Snowflakes on Silver Cove was that not only was it a great story in itself, but there were references to Lilac Cottage. Not major ones so if this is your first one reading you wont be missing much, it just made me smile when Libby and George visited the ice carving competion for example and we had already been there with Penny and Daisy.

I also loved the whole romantic feel of the book, and in true Holly Martin style it had be laughing away and some of the antics and one liners, but also brought a lump to my throat when Libby and George fell out.

Another fab 5 stars from me.... I cant wait to see what happens next in White Cliff Bay!

I would like to thank Bookouture and NetGalley for a review copy, this is my honest opinion.