Review: See Me by Nicholas Sparks 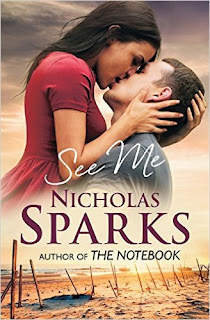 Colin Hancock is giving his second chance his best shot.
At twenty eight, he's focused on getting his teaching degree and avoiding all the places and people that proved so destructive in his past. The last thing yes looking for is a serious relationship. But when he crosses paths with Maria Sanchez one rainswept night, his carefully structured life is turned upside down.
And when Maria, a hardworking lawyer meets Colin she begins to question every notion she has ever had about herself and her future - and what truly makes her happy.


Before the couple has a chance to envision a life together, menacing reminders from events in Maria's past begin to surface. And as the treats of violence begins to shadow her every step, she and Colin will be pushed to breaking point.
The stunning new love story from the multi million copy bestselling author, Nicholas Sparks, See Me is a story of obsession, reinvention and a love that defies every expectation.

"When it comes to tales about love,  Nicholas Sparks is one of the undisputed kings" ~ Heat Magazine

I'm going to start my review for See Me with a confession... this is my first Nicholas Sparks novel *hides head in complete shame*

Everyone in the bookish world has of course heard of the man dubbed as the kind of love stories, and whilst I'll admit to not reading his work before, I can confirm that I do have a few of his novels in my ever growing TBR and have seen the The Notebook and Dear John on the big screen.

I'm not sure why I've never read a Sparks book before and if it hadn't been for me winning a copy thanks to Maximum Pop Books on twitter I don't think I would have read See Me quite so soon either,  although I'm really glad I did.

See Me was a refreshing read, not only because I've been wrapped up in festive reads over the past few weeks but also because, for me it was a great, unique story with a strong male lead.
There was a great descriptive prologue which set up the book up brilliantly but without giving away too much of the plot.

Each chapter of the book was told by Colin and Maria in alternatively prospective views which kept the book flowing. Colin was the ultimate bad boy. He's covered in tattoos and has history with the law, being on his final chance he's decided to turn his life around and go back to school and learn to become a teacher.
However he still battles at times with his anger and as a way of controlling this he's got an incredibly strict gym routine and has the occasional cage fight rather than uncontrolled bar brawl.
It's after one of his cage fights, when he is battered,  bloody and bruised that he meets Maria - she's stranded after getting a puncher and Colin offers to help, although obviously she is wary of the sight in front of her.

Maria is Colin's complete opposite - she's dainty and feminine, has true family values and a good job as a lawyer. On paper they should not go together but another chance meet set up by her sister Serena, egnites something neither of them were expecting.

As their whirlwind romance takes off, Maria starts to receive threats relating to a previous case she worked on and this angers and worries Colin to the point people question whether he really has changed... and as they race in time to save Serena it's clear what people will do for love even if it means risking their own lives.

See Me was a delightful story to ready, I adored the main characters and they way they came together. There was a strong sense of alliance between them, they way Colin would do anything for his friends and Maria even when his own life was in jeopardy, but there was also a great message about second chances and that first appearances aren't always a true account of individuals.

The book was a huge page turner that had twists and turns as the story unfolded, and despite the ending leaving me thinking and wondering about the aftermath and who survived, the epilogue wrapped it up will.

I generally rate the books I read and review on a 1-5 basis, however it was clear at only a few chapters in that this was way more than a 5.
Colin and Maria took over my life, whilst I wasn't able to read, my mind wondered over what had previously happened and where their story would go next, and when I did have the chance to grab a few pages I couldn't read them quick enough, which is why See Me is being awarded my rare  Super Flower Rating.


I cannot recommend this book high enough and I certainly won't be waiting this long to read another from Nicholas Sparks! !
I would like to thank the guys at Maximum Pop for running the competition and giving me the chance to read this amazing novel!