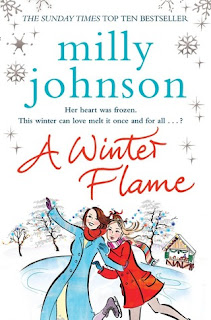 'Tis the season to be jolly...But can Eve find happiness through the frost...?

Eve has never liked Christmas, not since her beloved fiancé was killed in action in Afghanistan on Christmas Day. So when her adored elderly aunt dies, the last thing she is expecting is to be left a theme park in her will. And one entirely dedicated to Christmas....

And that's not the only catch. Her aunt's will stipulates that Eve must run the park with a mysterious partner, the exotically named Jacques Glace. Who is this Jacques, and why did Aunt Evelyn name him in her will?

But Eve isn't going to back down from a challenge. She's determined to make a success of Winterworld, no matter what. Can she overcome her dislike of Christmas, and can Jacques melt her frozen heart at last...?

Eve hates Christmas, especially since her fiancé Jonathan lost his life at war in Afghanistan on Christmas Day. When Eve's aunt Evelyn passes away, her Christmas nightmare worsens as she is left ownership to half of a Christmas theme park in her will. Not only that but she is forced to work with mysterious Jacques Glace who has also been left half of the theme park.

Eve is instantly suspicious of Jacques - how did he know Evelyn? And why did she decide to leave him such a big gift in her will? Eve is determined to make the park a success for her aunt but can she work effectively with Jacques, especially when they have such conflicting ideas?

It is clear that Eve has not grieved for her fiancé and manages to cocoon herself in her own little world, working so hard that she falls ill with shingles. This means that Jacques is left in charge of the park, much to her disapproval, but on arrival back at the park she is surprised to see what a good job Jacques has done. Nonetheless, she is still suspicious of him and we are left wondering whether or not she will get to the bottom of the mystery surrounding Jacques Glace and whether they can they work together to make Winterworld a success.

This is the first Milly Johnson book I've read and I absolutely loved it. I fell in love with the characters, they're so well written and you truly feel a part of the story. I felt particularly attached to the character of Effin Williams as he came from my town of Carmarthen - the bits of Welsh in the book made me howl as I needed no translation and the rude language he used was actually funnier in his mother tongue.

There were several moments in which the book kept me guessing. For example, there's the mystery behind Jacques Glace, with his background not apparent until nearer the end. There is also Violet and Pav's relationship, where certain things only add up as the story develops. I loved the odd chapters made up of 'The Daily Trumpet' newspaper mishaps, especially as they have a significance near the end of the book.

A Winter Flame made me feel so Christmasy, it's hard not to feel excited for this time of year with all the references to Santa, reindeer, snow etc and it made me want to visit a place like Winterworld. The book made me laugh and cry in equal measures and there were times when it really pulled on my heart strings. Without doubt one of my favourite Christmas books, I'd encourage you all to read it.

Fantastic from start to finish, 5 flowers!