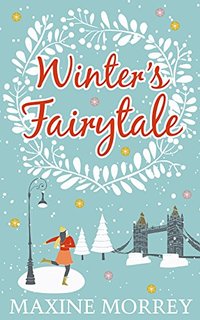 Step into a winter wonderland and fall in love in the snow this Christmas…
Let it snow, let it snow, let it snow…
A few weeks before Christmas and a sudden blanketing of snow has closed the roads and brought public transport grinding to a halt, stranding Izzy miles from home and in desperate need of rescuing.
That doesn’t mean she’s looking to bump into Rob and spend a cosy weekend holed up in his swanky flat watching London become a winter wonderland! Because Izzy and Rob have history…
Six months ago, they were standing in the vestry of a beautiful country church, while best man Rob delivered the news that every bride dreads on their big day.
But at the time of year when anything is possible, can Rob and Izzy let go of the past and let Christmas work its magic? Or will this be one holiday wish that Izzy lets walk right out of her life…

Winters Fairytale is one of them books where your eyes are at the bottom of the page before you have read and digested the top - well it certainly had that effect on me anyway! It was a real page turner and I'm not ashamed to admit that I completely got lost in the romance of Izzy and Rob's Fairytale!

Izzy is a wedding dress designer, she loves all things wedding related and her work space is her sanctuary, and when you read about her manky flat you can understand why she spends more time at work! After chatting to her best friend Mags, she discovers that Rob has been asking after her, shes avoided him since that awful as not only is she embarrassed about hitting him but he is the best mate of her ex - awkward much?!

When Rob turns up outside her office one snowy night she has no choice but to speak to him - this quickly escalates in to her spending the complete weekend at his flat... not like that, but due to the bad weather making it impossible for her to get home.

When Rob calls Izzy up one night in a massive panic, the wedding dress for his sister, Jen, has arrived as a total disaster, Izzy does what she does best and agrees to help make Jen feel every bit as beautiful as a bride should be - at a cost of spending more time with Rob and his family, including Christmas and New Year.

As Izzy's heart starts to melt around him, Rob gives mixed hot and cold signals and when his ex turns up, Izzy tries to not let her heart get broken again.
I'll let you read the book for yourself to find out what happens but it takes right up until the stroke of midnight at New Year for them to sort themselves out!

All of the characters were loveable in this book. Izzy was such a warm character that your heart instantky reached out to her as she told the story of being ditched, whilst Rob... well lets just say everyone should have a Rob in their lives!

Winters Fairytale makes me think Cinderella and whilst this is a bit like a Cinderella story it is much more sophisticated and adult like, with realistic scenarios.
At times during the reading of this I had tears in my eyes, but mostly I was smiling throughout. Occasionally when I thought they might just get together I even got that warm glow that you want from a romance book - add that to weddings and Christmas and you pretty much have the perfect 'Winters Fairytale' read!

I would like to thank CarinaUK for a copy of Winters Fairytale via NetGalley in return for my honest opinion.