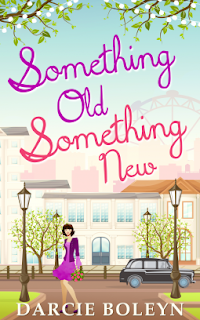 When Annie Thomas agrees to give her ex away at his wedding to his boyfriend, she thinks she’ll be fine. With her three children at her side, she can handle anything. Then she finds out her gorgeous first ex-husband Evan Llewellyn is flying in from his glamorous life in New York to attend as well!
An unexpected pregnancy ended their relationship and as she stumbles through the ups and downs of life as a working single mum – helping everyone else find a happy ending along the way – Annie refuses to believe their old and incredibly hot spark can still exist.
It’s only when she and Evan are forced to face up to the past together that they’ll discover if they can have their own happily-ever-after too!

Today is my stop on the blog tour for Something Old, Something New by the lovely Darcie Boleyn and I'm sharing my review with you - there's also a giveaway to win a copy of the ebook so make sure you read to the end!
I really, REALLY wanted to be typing about how much I adored this book as I did Darcie's début last year, Wish Upon A Christmas Cake, and when I saw the gorgeous book cover revealed I was full of high hopes.
Let me be clear, whilst I didn't adore it as much as I'd hoped, I didn't dislike it either - which makes this review all the more difficult to write.
The story follows Annie Thomas, a single mother to teenage daughter Janis, and youngsters Henry and the adorable Anabelle. Annie's family is very contemporary too - her first ex-husband Evan is a high flying business man, whilst her second ex- husband Dex, marries within the story to his partner, Trevor. I commend Darcie for writing a book about modern times and this in itself was refreshing to read.
Annie clearly still holds a torch for Evan (Janis' Father) and as soon as he moves jobs to base himself permanently in the UK we see that his feelings are mutual, albeit they do dilly dally around and deny it for a while.
Trust is a big feature within the book, along with a bit of a will they, won't they get back together scenario. Throughout there are wonderfully humorous parts too, equally there are moments where I felt my eyes well up. All in all it was a cute story with some brilliant and colourful characters and dog names!
=My gripe, if you could call it that, is that that the first third of the book didn't flow for me.
Although the first couple of chapters were well written in Darcie's brilliant style, for me they felt a bit 'bitty' - almost like memoirs whilst the next third, despite the story getting into it's flow, I found to be repetitive at times - not only did history repeat itself with the plot involving Janis and Annie, but I found the narrative telling the same sninippits I'd read or grasped in earlier chapters.
The final third however was the best of the book for me, and it was everything I'd hoped it would be from knowing Darcie's previous work, so I'm really glad I stuck it out, and despite the slow start (which I'm putting down to those second book troubles we hear often about) I'm looking forward to seeing what Darcie follows Something Old, Something New with!

Darcie Boleyn has a huge heart and is a real softy. She never fails to cry at books and movies, whether the ending is happy or not. Darcie is in possession of an overactive imagination that often keeps her awake at night. Her childhood dream was to become a Jedi but she hasn’t yet found suitable transport to take her to a galaxy far, far away. She also has reservations about how she’d look in a gold bikini, as she rather enjoys red wine, cheese and loves anything with ginger or cherries in it – especially chocolate. Darcie fell in love in New York, got married in the snow, rescues uncoordinated greyhounds and can usually be found reading or typing away on her laptop. 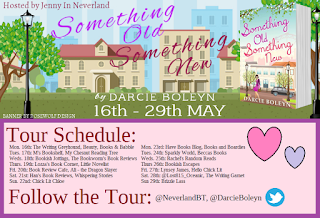