Blog Tour ~ Review + Giveaway | Im Not In Love (Once Upon A Winter, Book 2) ~ Tilly Tenant

I'm delighted to be back on the blog tour hosted by Brook Cottage Books for the next installment of Tilly Tennant's latest series, Once Upon A Winter.
Book two is titled I'm Not In Love and I would like to thank Tilly and BCB for a review copy, for my review of Book one, The Accidental Guest, please click here. 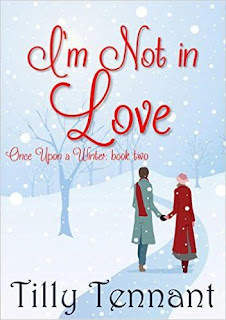 Genre: Chick lit
Release Date: 7th January 2016
Publisher:  Lawsome Books
The tinsel and baubles are packed away, and the festivities are over for another year, but Hannah can’t forget the mysterious stranger who fell into her world on Christmas Day. She flings herself back into normal life in a bid to get him out of her head, which means dating other men and having fun with her sister, Gina. But just as she’s getting back on track, fate throws him into her path once more. And this time it results in far more complications than a burnt turkey. Meanwhile, Gina, is creating problems of her own. As if a messy divorce isn’t enough, she grows closer to Ross, the local farmer’s son. Hannah knows her sister is not going to be popular when the relationship becomes public, especially with Ross’s doting parents or, indeed, Jess, Gina’s teenage daughter, who is far closer in age to Ross than Gina is herself. Things are about to get very, very messy in Hannah’s neat little world…
BUY LINKS
AMAZON UK
AMAZON US

My Review
(please note, this is short and sweet as the book is a novella and I don't want to give too many spoilers!)

We pick up Hannah's story just after Christmas. Her sister and niece, Gina and Jess, have returned home and Hannah is trying to get back to normality, however the mysterious Tom - whom if you remember turned up with no recollection who or where he was on Christmas Day - is still very much playing on her mind.

She throws herself into everyday life but when Tom, who we learn to know as Mitchell, arrives at her door for a second time with his wife, Hannah's thoughts and feelings are again thrown into turmoil. After Mitchell and his wife, Martine, thank Hannah for her festive help they are off and she tries to clear them from her mind and life.

The gorgeous, farmer man Ross is still very much another hero of the story as he continuously helps Hannah out and after she ends up having tea and cake with his mother, she is talked into attending a charity dance. Begging Gina back up to stay and attend with her, Hannah enjoys herself until Mitchell and Martine arrive.

The end of this part of the story is left with Hannah pondering over some very specific words exchanged from her and Mitchell...

As with book one, this was a fairy quick read, although I found the first few pages a little slow getting into - I think this was more down to the fact that a while had past since I read the first part and so I was having to remember bits before moving on.

What I love about Tilly's writing style is her ability to make you feel part of the conversation between characters - throughout the whole of I'm Not In Love, I felt like I was there listening first hand!

What I don't love so much is the fact I have to wait for the next part...Ahhh!