Today is my stop on the mean girls blog tour and, thanks to the lovely AVON team, I have a sneaky peek for you with an extract from Chapter 2!! 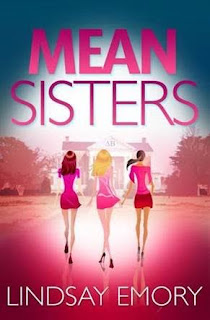 A sassy, hilariously funny murder mystery where the closest bonds of friendship might just kill you…!Margot Blythe is a twenty-something year old who can’t seem to let her college glory days go. After all, everyone deserves a family of ‘sisters’ like she had. When she’s invited to speak at her alma mater, her homecoming reception isn’t exactly what she expected. Tragedy strikes and Margot has to step up, especially when foul play is suspected.She’s going to save her fifty frazzled ‘sisters’, keep the suspicious (but dangerously cute) police officer at bay and find out the truth – could a sister have committed such an unimaginable sin as murder?Margot is going to learn the real bond of sisterhood and maybe, just maybe, discover where she truly belongs.

Ten years as a Delta Beta had prepared me for dealing with hysterical young women. Of course, I'd

never dealt with the aftermath of a Chapter Advisor dropping dead in a chapter meeting. My closest

I'd just met Liza McCarthy, the now shrouded young woman currently being wheeled out by the

Sutton medical examiner. I crossed myself like the Real Housewives of New Jersey did as I saw the

ambulance doors close behind her. She had been a sociology graduate student at Sutton and was by

all accounts a smart, beautiful woman who truly personified the Delta Beta ideal. Our sisterhood had

lost a star. And one so young! Liza McCarthy must have been around my age, too young to be felled

With the Chapter Advisor rolling away to the morgue, I was left as the responsible adult on the

scene. I herded the pledges into the dining room, the initiated members into the TV room and called

for volunteers to distribute lemonade and whatever snacks could be rounded up in the kitchen,

hoping to distract the young women until the police had finished.

The Delta Beta sorority house was not overly large at three stories tall. The first floor had a dining

room, TV room and chapter room directly off an impressive two-story foyer with a curved stairwell.

Through the dining room was the kitchen and a small office. Off the TV room was a dark hall leading

to a laundry room, a half bath and a studio apartment. The second and third floors had bedrooms for

about thirty initiated members. Essentially, a sorority house was a dormitory, but it felt more like a

gracious, large home. I felt the warmth and comfort of the house envelop all the hyperventilating,

confused young women grieving the sudden death that had occurred in their midst.

Even though I knew Sutton, North Carolina, was a small town, I was highly unimpressed with the

police force that had shown up at the house. TV made police work look far more intense than it was.

After the paramedics and medical examiner left, only two police officers strolled around, taking

notes and photographing ‘the scene.’ I guessed they had nothing better to do on a Monday night

except make a big production out of an unavoidable tragedy.

I was busy consoling several girls when I overheard one of the policemen. ‘Tell me what happened

next,’ he said to one of the chapter officers.

Heck, no. That was not happening on Margot Blythe's watch. I marched right over to the policeman

to put a stop to that – but not before I noticed that this was one extremely good-looking man.

Several inches over six feet tall with wavy, dark blond hair, of course I noticed. At a different time, I

probably would have approached him differently. Maybe I would have smiled charmingly, batted my

eyelashes and placed a hand on that very firm looking bicep of his. But people were grieving and I

couldn't let him take advantage of our pain.

‘Don't say another word,’ I said to the young woman being questioned. Her nose was red and puffy,

‘We were in the middle of something,’ said the police officer. I turned to him, my hands on my hips.

He wasn't in uniform, but he wore a navy polo embroidered with the police insignia. A name tag

identified him as ‘Hatfield’.

‘Mr Hatfield,’ I addressed him.

‘Lieutenant Hatfield,’ he corrected me.

‘This is a minor. You can't question a minor without a guardian or parent.’ I'd read that somewhere

in a manual. It seemed legit.

‘Blythe,’ I provided my name with all the authority I could muster. I was the chapter's assigned

Sisterhood Mentor, after all. ‘Margot Blythe.’

Hatfield’s head jerked back then. When I got authoritarian, I noticed that respect changed people.

‘Ms Blythe,’ he started to say again, ‘I'm just talking to witnesses. This is a friendly conversation.

Nobody’s under any suspicion.’

‘Fine,’ I said. ‘But I'm staying right here.’ I wrapped an arm around the girl's shoulder so she knew I

was there for her, for support or for protection – whatever she needed.

Hatfield didn't seem to love that idea, but he couldn't do much about it. He looked back at his notes

and then started again with the questions.

‘You said you were wrapping up the chapter meeting and the girls started to recite something...’

Hatfield raised his eyebrows at me. ‘What did you say?’

‘Objection,’ I repeated. He obviously only watched the ‘law’ part of Law & Order. The ‘order' part

was always the more dramatic stuff. I looked at the girl. ‘Don't answer that.’

Hatfield looked between me and the girl and instead of respecting my objection, he went ahead and

repeated the question. ‘What were y'all reciting?’