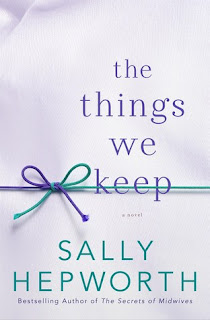 Anna Forster, in the early stages of Alzheimer's disease at only thirty-eight years old, knows that her family is doing what they believe to be best when they take her to Rosalind House, an assisted living facility. She also knows there's just one another resident her age, Luke. What she does not expect is the love that blossoms between her and Luke even as she resists her new life at Rosalind House. As her disease steals more and more of her memory, Anna fights to hold on to what she knows, including her relationship with Luke.
When Eve Bennett is suddenly thrust into the role of single mother she finds herself putting her culinary training to use at Rosalind house. When she meets Anna and Luke she is moved by the bond the pair has forged. But when a tragic incident leads Anna's and Luke's families to separate them, Eve finds herself questioning what she is willing to risk to help them.

I spotted The Things We Keep on NetGalley a fair while ago, the cover caught my eye but the blurb intrigued when I read the word Alzheimer's.

Alzheimer's is still very much a taboo subject, it's a little like cancer was 15/20 years ago when it was just referred as the "big C", and being Dementia and Alzheimer's trained, working with sufferers of this cruel disease day in and day out, I'm thrilled that there are now novels available, spreading the message and making more and more people aware and have a better understanding.

Starting The Things We Keep, I was a little apprehensive on how it was going to pan out but it's clear to me that Sally Hepworth had done her research.

The story is told from the perspectives of the three main characters, and has a slight sliding door aspect to it....
Anna is only thirty eight and has been diagnosed with Alzheimer's and starts the book off fifteen months ago when she and her twin brother, Jack, are settling Anna into Rosalind House - a residential assisted living home which they carefully selected due to there being another resident with Dementia, Luke, already living there. Before Anna's illness she was a real fiesty and quick tongued character and at times her witty one liners shone through which kept the book light hearted on what is a deep subject.

Eve comes to Rosalind House after the death of her husband and her part of the story is told in the present day, as are the odd few chapters told from her seven year old daughter, Clementine.
Eve's and Clem clearly bring sunshine to the residents - Eve with her fabulous cooking and kind caring nature, one that she shares equally with her bright and bubbly daughter who is happy to dance and cartwheel around entertaining everyone.
Eve and Clem have their own story within this book, I won't give all the details now and spoil for you, but they have had a hard few months prior to now but Rosalind House gives them a chance to move on and look forward to a different future to the one planned.

What is clear from Eve's perspective though, is her soft spot for Anna. On their first meeting Anna asked for help and Eve vowed to do just that, although at the time it was dismissed and unclear why help was needed.
Eve is a really observant character, which from my own job role I know is important with Dementia patients, and one thing she's noticed is the bond between Anna and Luke. She is unable to understand why they have to be kept separated and have their rooms locked each night, yet after finding a letter Anna wrote to herself, Eve breaks all the rules and unlocks their rooms so that the pair can spend time together once everyone else has retired for the night.

The chapters with Anna really keep the book going, and for me were written just brilliantly. Each one took us back, 14 months ago 12,10,9... etc and gave us the clues as to why her and Luke had been separated. Not only that, they were written giving a real insight to the mind of someone suffering memory issues - using words such as "the laying down thing" for bed, or the "tight things on legs" for trousers, really gave the reader a sense of how simple words can be forgotten.

Anna's chapters of the past months also told us how her and Luke's relationship formed and how someone could feel having decisions made for them when inside they really wanted to just scream that they understood that bit but just couldn't find the words - I guess one way to describe Anna's parts were that it was being told from the working part of her brain and not her, and there was one part in the book - quite a big part of the story so I won't give any details - but Anna's "brain" told us one thing but to her brother, other residents and the staff it looked completely different.

What I thought was really lovely of the story was the ending. Whilst reading I had no idea how the end was going to be - I know that complications from Dementia and Alzheimer's will eventually lead to loss of life and I honestly thought that's how the book was going, but I was pleasantly surprised that it stopped with a memory from Anna of her first meeting with Eve - it sort of brought the book around full circle and ended on a more happier note.

Although, as I've mentioned, this book pulled me in due to my interest in the condition, Sally Hepworth didn't over complicate things and used what I thought was a really good and understanding analogy to explain how Alzheimer's worked with would give the reader a clear insight - I was utterly gripped from the first paragraph!!

The Things We Keep was a story of love, loss, friendship, understanding and moving forward. Apart from the evil manager of the home who was written to be like that, I loved all the characters and their relationships - especially the ones between Anna, Luke, Eve and Clem.

I challenge anyone to not read this book without gasping at times, not only was there a few unexpected turns in the story, there was eye watering moments (Clem talking to her deceased Father is all I'll say!) and some humbling moments that proves love lasts whatever age or condition your faced with - when you meet the right person it just works as with Anna and Luke.

Upon finishing what ultimately is a really lovely and unique of love and friendship, it will certainly make you take a breath and look at life in a different perspective and how one persons brain tells a different story to other people's words.

I would like to thank the publishers, St Martins Press, for a review copy of
The Things We Keep
supplied via Net Galley. This is my honest opinion.