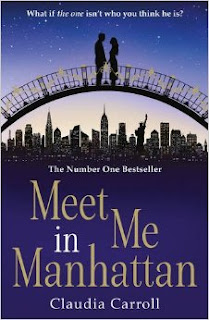 In a New York minute, everything can change …


You don’t mess with aspiring journalist Holly Johnson! The man she fell for is not all that he seems – because sometimes dating online doesn’t quite go to plan. She’s decided to fly to the Big Apple to surprise him and to get some answers. And if her plan works she’ll also get the scoop of her career …


But as she steps out of her yellow taxi and the first snowflakes start to fall, it’s Holly who has the surprise of her life.


What should be a dream come true is looking a little like a nightmare. But Holly is determined to get her New York happy ending!

I've just finished reading Meet Me In Manhattan by Claudia Carroll and have a smile on my face - I'm a total sucker for a happy ending in a book and this certainly didn't disappoint!

We are introduced to Holly, the main character, whilst she is sat in a restaurant awaiting her date - handsome, charming, family man Andy - a pilot no less whom has flown in to Ireland and therefore created the perfect chance for the pair to meet. Only after an hour or so, Holly has caved in, realising that she has been stood up. Andy is full of apologies and they arrange another - low and behold the same things happens.

It was at this point in the book that I thought something wasn't quite right with Andy... the story is told completely through Holly's eyes and as she told it my suspicions became more so. After Holly's flat mate does a background check on Andy to find that his IP address is in an entirely different state of America to what he had claimed, Holly decides to hop on a flight and catch 'Andy' in the act - Catfish is one of my guilty pleasures to watch on TV so reading it in a story was completely refreshing and relevant to current going ons on the Online Dating World!

When Holly finally meets 'Andy' she is shocked to say the least... Harry, the guy who not only has been arranging to meet Holly but also been emailing and calling endlessly isn't really a guy at all.. more like boy! Yes, Harry is a 16 year old who is just as shock as Holly is.

AS the course of Holly's trip unfolds, we get to know a little about Harry and his life, particularly his older, much older, brother Mike, who takes it upon himself to show Holly a good time in New York whilst she is there... It was lovely to read their relationship blossom but I was also shouting at the book for them to 'just get on with it' as they did drag their heels a little!

Mike has come as the perfect distraction for Holly as Christmas isn't her favourite time of year - throughout the book there is hints as to why this is the case but it's not until nearer the end that all is revealed.

Although at points of the book I found the storyline a little predictable, it was well written and the story kept the pages turning over. Holly was a great character who really wanted nothing more than to just be loved by someone, and I enjoyed the whole Catfish element. The peak of the book where Holly is in NYC is based at Christmas and in to New Year but I think you can read this book at any time as they are only touched on and not celebrated in too much detail keeping Catfish as part of the stories lime light.

I would like to thank the publishers, Avon, for supplying a review copy via Net Galley and paperback.
This is my honest opinion.