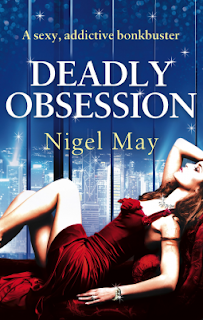 Sex, money and obsessive love – welcome to the marriage of millionaires Amy and RileyAmy Barrowman grew up on the wrong side of the tracks. So when she marries millionaire Riley Hart, she can’t believe her luck. Not only does she have wealth and security for life, she has found true love. Or so she thinks… Riley Hart is a Millionaire Man about Town. Men want to be him and women want to bed him. But to achieve Riley’s status, you have to tread on a lot of toes and make a lot of enemies. When Riley is gunned down at the nightclub they own, Amy is determined to avenge his death. She receives a mysterious letter detailing a list of suspects including Riley’s sworn enemy, actor Grant Wilson. But with an obsessive passion brewing between her and Grant and a dangerous assassin trailing her every move it would seem Amy has opened a deadly and tempting Pandora’s Box. As Amy gives into temptation, the scene is set for a stunning climax. Lose yourself where you don’t belong in the world of DEADLY OBSESSION.

Nigel May is one of the authors I discovered when I first started blogging last year, when I had the chance to read his glamorous and seductive novel, Scandelous Lies, which you can read my review of here - dubbed as a bonkbuster writer that lives up to the likes of the late, great Jackie Collins, I was eagerly awaiting his latest work of art - an boy, let me tell you, Deadly Obsession did not disappoint!

Deadly Obsession wasn't as sexed up as Nigel's previous book, it was darker, meaner, grittier and an utter page turner!

It started with the main female character Amy, opening a letter from her husband Riley - slight catch, Riley was dead! Immediately as a reader your mind started whirling and if this was real life could you just imagine what Amy was feeling? Husband - dead. Burried six months ago. Letter dated two days ago? How?

How indeed? Nigel May took me on a complete page turning journey with this one. The book was a mixture of chapters from now and chapters from then - then being at The Kitty Kat Club which is where the fateful night took place and then to memories of prior to the event too.

Amy, now living in London, embarks on a journey back to her Mancunian routes to find out how and why Riley survived. As she does this, she discovers that her beloved Husband was not all he seemed and she has to question if she really knew him at all. Visiting old faces, Amy is told of many secrets, lies and murders which Nigel is perfect at writing - as well as the odd sex scene.

As Amy ticks off all the suspects one by one trying to find out who not only killed Riley but also her best friend Laura, I felt many of the emotions as a reader that she had as a character - shock, anger, sadness.... Deadly Obsessions literally had it all!

One of the things I loved last year with Scandalous Lies was the twists and turns of the plot. Deadly Obsession had more of these than I could expect - as I was thinking one thing, the complete opposite happened - particularly the ending... poor Amy - how many bombshells can one girl take?!

I loved several of the characters within this book and there was a real mixture too - Lily was feisty and had a matter of fact attitude, Grant thought he was gods gift with his good looks and acting skills whilst Dolly was fun and flirty!
An of course there was Amy - little innocent Amy. I felt for her at times but then as the shocks came with every secret and lie discovered, I wanted to scream at my kindle that she was being naive and needed to grow up, but ultimately I just wanted her to find some closer after all she had been through, and the epilogue that Nigel wrote, was one that I found myself smiling at.

If your looking for a book that will keep you on your toes but has all the added bonus of being a glitz and glam bonkbuster, then I can't recommend Deadly Obsessions enough. Nigel May is definitely one I'm keeping my eye on for future releases!