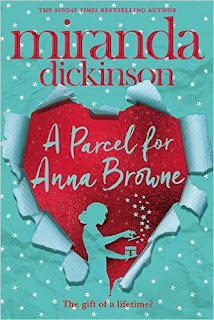 The gift of a lifetime?
Anna Browne is an ordinary woman living an ordinary life. Her day job as a receptionist in bustling London isn't exactly her dream, yet she has everything she wants. But someone thinks Anna Browne deserves more . . .
When a parcel addressed to Anna Browne arrives, she has no idea who has sent it. Inside she finds a beautiful gift - one that is designed to be seen. And so begins a series of incredible deliveries, each one bringing Anna further out of the shadows and encouraging her to become the woman she was destined to be.
As Anna grows in confidence, others begin to notice her - and her life starts to change. But who is sending the mysterious gifts, and why?

I've had A Parcel For Anna Browne on my kindle for what feels like forever, but unfortunately Christmas kind of took over and it was pushed to the lower half -  now that the festive season is over, this gorgeous looking book was my first choice.

Anna Browne is the prime character in the story, she hasn't had an easy upbringing with a low life mother and people feeling sorry for her, so made an escape to London at the first chance she got.
Now working for a large newspaper running the receoption team, Anna is happily content with her life.

That is until a series of parcels are delivered to her.. each beautifully wrapped but with no known sender. As the gifts are unwrapped, they have a profound effect on Anna, making her feel taller, stronger and more beautiful. It even gives her a new found confidence when she has to work with one of the news reporters, Ben, during a  job swap week.

Things seem to be going well for Anna and Ben until he breaks a story about her deliveries...

Miranda has a brilliant way of story writing and telling. The book had a love story along with an air of mystery. It left me wondering who sent the parcels and wishing someone would send me some too!

I would like to thank NetGalley and the publishers, Pan Macmillan for an ARC of this book.
This is my honest opinion.