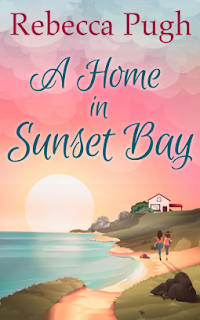 There’s no place like home… Enough is enough! The always perfect Laurie Chapman had jumped in her car and raced as fast as she could from London heading to Sunset Bay and (she hopes!) the open arms of her estranged sister…

Mia Chapman loves running Dolly’s Diner in the picture-perfect coastal Cornish town of Sunset Bay. Now that her and Grandma Dolly’s dream is finally a reality Mia has never been prouder! Until Laurie suddenly turns up on her doorstep… How can she forgive the sister who walked away?
Once upon a time Mia and Laurie were best friends. Back together after so long, the time has come for the sisters to figure out what went so wrong all those years ago – and whether they can ever put it right!

I first discovered Rebecca Pugh when I started blogging back last year, at that time she had just released her first novel, Return To Bluebell Hill, and although I have yet to get around to reading that (sorry Becca!) I was eager to read her second book, A Home In Sunset Bay.
Since 'meeting' Rebecca on twitter I have been following her blog, Becca's Books, and absolutely love her writing style - she's incredibly descriptive and has a wonderful and glorious way of making what you read feel magical - I'm sure if she could virtually sprinkle her words with Disney fairy dust, she would!
A Home In Sunset Bay was everything I expected from a book from Rebecca, her attention to detail in locations and character traits are second to none, making me feel like I was on the beach, friends with Mia and Laurie or sat in one of the booth's in Dolly's Diner - one of the main attractions of the story.
A Home In Sunset Bay is written in the third person and has a very easy flow to it - in fact, bar the last 15 minutes of the book, I devoured the story in one sitting and I'm positive I would have completely if it wasn't for going away for a couple of days. Mia and Laurie are sisters and were the absolute best of friends, within each chapter both were featured but I felt Rebecca concentrated on one sister more which really gave us an understanding of them.
Mia runs Dolly's Diner and has done since their grandmother, Dolly, passed away. She loves doing what she does and tells herself she's happy, but a certain chap named Cal would make her happier. Unfortunately he is with someone and Mia just accepts that. Meanwhile, Laurie is miserable and unhappy since the death of her friend and this is double when she catches her so called boyfriend with another woman - the git! Deciding she needs to get away, Laurie heads to Sunset Bay but doesn't receive the most of friendliest welcomes from her sister.
It's clear that something has happened between the two girls and when it was revealed, I felt a little flat. I could understand why they wouldn't be talking to each other and think Rebecca came up with a great scenario that I'm sure happens with families every day, but for me personally I wanted a few more fireworks or something a little more juicer!
But.. that is just my opinion and I don't think it took anything away from the book. It was nice to see them over come the issue they had and start to built bridges with the help of some special people!
Over all, A Home In Sunset Bay was a fabulous story about love, friendship, understanding and forgiveness. The settings were beautiful and the characters likeable and realistic.
For someone in their early 20's to be writing great books now, I can only foresee Rebecca growing and growing as an established author and I can't wait to see her develop and progress further on her journey.