Cover Reveal | The Girl Who Walked In Shadows ~ Marnie Riches

It's a packed weekend on Lozza's Book Corner with blog tours the past two days however today I'm delighted to bring you the first of TWO cover reveals for the lovely Avon team! The first is below and the second will be tomorrow, so without further ado... 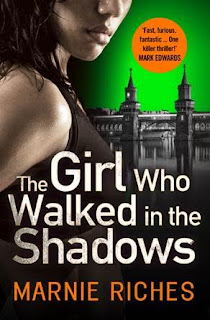 THE GIRL WHO WALKED IN SHADOWS
Marnie Riches
31st March 2016

Europe is in the grip of an extreme Arctic blast and at the mercy of a killer, who leaves no trace. His weapons of choice are razor-sharp icicles. This is Jack Frost.

Now a fully qualified criminologist, Georgina McKenzie is called upon by the Dutch police to profile this cunning and brutal murderer. Are they looking for a hit man or a frenzied serial-killer? Could there be a link to a cold missing persons’ case that George had worked with Chief Inspector Paul van den Bergen – two abducted toddlers he could never quite give up on?

The hunt for Jack Frost sparks a dangerous, heart-rending journey through the toughest neighbourhoods in Europe, where refugees and Romani gypsies scratch a living on the edge of society. Walking into the dark, violent world of a trans-national trafficking ring, can George outrun death to shed light on two terrible mysteries?