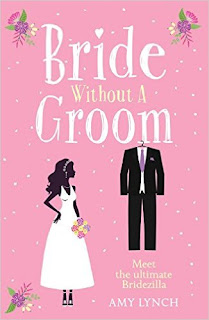 Bride Without A Groom
Author: Amy Lynch
Published: Maze, May 2015

Single, coupled-up or married, this laugh-out-loud summer read is the perfect anecdote for the wedding season!
Rebecca has chosen the most luscious, five tiered, wedding cake. The engagement ring that she has selected is celebrity inspired. The wedding singer is on speed dial. He doesn’t usually do Michael Bolton, but as it’s for a first dance he’ll make an exception. Father Maguire is checking dates for the parish church as we speak. The deposit on the white sand honeymoon is paid for in full on Barry’s card. She has fallen for an ivory lace couture gown that is to die for. The down payment may require her to sell a left kidney, but it will be worth it. Isn’t that why you have two?
There’s one teeny tiny problem. It’s nothing, really. No need to panic! It’s just that Barry has yet to propose. Says he’s not ready! He can be a bit of a kill joy that way. It’s time to face the harsh reality – Rebecca is a bride without a groom!

I've had Bride Without A Groom sat on my kindle for a while now, when the Author, Amy Lynch, mentioned that she would be running a blog tour to celebrate this book's birthday, I jumped at the chance as it forced my hand in to reading one I've been longing too!

The book tells the story of Rebecca and is in the narrative of the 1st person, with exception of the odd few chapters which are in the third person and looks more at Barry's perspective.

Barry is the long suffering other half of Rebecca, and the story starts with her birthday. Barry has taken for her a swanky meal and right from the start she thinks it's so that he can propose to her - giving us a great insight to how Rebecca's mind works.

She is obsessed, I mean really obsessed, with weddings - followed closely by celebrities and their weddings. She has folders hidden with samples of Vera Wang dresses, venues, cake designs - you name it, she has it planned.

The small matter here is that Barry has yet to propose and when Rebecca goes a step too far just before he has to travel abroad for work, they have one almighty row.

Whilst apart they have time to think and evaluate their relationship. Rebecca turns in to a bit of a slob, drinking far too much alcohol and eating far too many takeaways whilst constantly ringing in sick to work. Barry on the other hand is trying to fight off his flirty co-worker but when he wakes in the same bed is guilt ridden.

Amy Lynch has written a fun love story full of humour and wit.
I was chuckling away as I was reading along with gasping at what Rebecca got up to next - every chapter she was up to something and even whilst her and Barry were apart she was still the ultimate Bridezilla!!

I enjoyed reading this book and will be looking out for more of Amy's books.