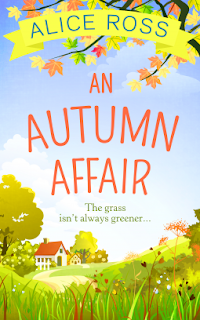 Autumn is coming. Anything could happen…
Julia is contemplating an affair with ex-boyfriend Max after a chance meeting in the cereal aisle of the supermarket…and finding that he’s just as gorgeous as ever.
Miranda has got it all: expensive clothes, a huge house and her enormously wealthy husband, Doug. So why does she feel as if something is missing?
Faye is fed up of being treated like a child – she’s a teenager, and knows what she wants! She’s determined to escape her sleepy life at Primrose Cottage…
Three women, each with two options, needing to make one choice. When it comes to affairs of the heart, nothing is ever simple!
A perfect, feel-good read about love, life and family.
Previously published as A Country Affair
~~~~
An Autumn Affair is a really cute story telling the tales of the lives of three women - each with choices to make which will either enhance or hinder their lives.

I found the first half of An Autumn Affair quite slow to get into, and then when I found the pace picked up, the story felt like it was over before it really began.

Julia is mother of twin, Faye being one of them. She is in a lifeless marriage which she kind of fell into after falling pregnant and her career dreams halted. When she meets and ex boyfriend who was the love of her life in the local supermarket she wonders if there is more to life than what she is currently living. Faye is quite rebellious and is short on friends - that is until she is befriended by Josie - daughter of Miranda.
Miranda comes with her own issues - she's just discovered she's pregnant by a man who isn't her husband!

As the three women - Julia, Miranda and Faye make their decisions in their own lives, their paths are crossed and new friendships are made whilst old relationships are dealt.

I enjoyed reading this book, however for me personally I felt that there was something missing - I was waiting for a few fireworks that never came.
That said, if your looking for a really easy going, chilled out book to read then An Autumn Affair is one for you.