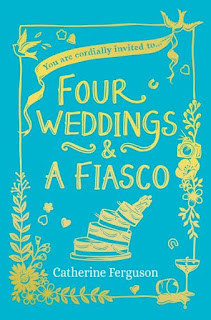 Today is my stop on the Four Weddings and A Fiasco blog tour and I am delighted to be bringing you part 10 of an exclusive short story that Catherine Ferguson has written just for this blog tour!!

If you haven't read the story so far then the blow image will show you the other blog tour hosts - do check them out! 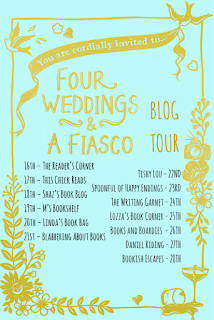 ONE BRIDE AND A BOMBSHELL

10
Jonathan looked sheepish. ‘No wonder you’re shocked,’ he said. ‘I should have told you in the pub that I was getting married today. I don’t know why I didn’t. Pre-wedding nerves probably.’
I shook my head, in a daze. ‘It doesn’t matter.’
Camilla had arrived and was staring over at me, trying to attract my attention, but my insides were in turmoil. Keesha had obviously told her husband-to-be a pack of barefaced lies, but why?
Camilla’s words came back to me. She’s done so well for herself. Jonathan’s a real catch! He’s a commercial airline pilot.
And Keesha had managed to ensnare him.
Now I thought about it, she always used to brag that she was going to marry someone really important, like an actor or a pop star, so she could have loads of money, go to the Caribbean a lot and live in a mansion.
I had to ask him. ‘Was it – was it you who proposed to Crusher – I mean, Keesha?’
He smiled. ‘No, actually, she asked me.’
I groaned inwardly.
‘It was a brave thing to do,’ he said. ‘Especially since we hadn’t been seeing each other all that long. But then, that’s Keesha all over. Courageous, loving and so incredibly kind. I’m a really lucky man.’
I felt like laughing.
But it was so very far from funny. Jonathan was a nice, decent guy and Crusher Dixon was planning on taking him to the cleaners.
Oh God, what was I supposed to do?
Time was running out.
If I was going to tell Jonathan everything, I’d have to do it right now. Before Crusher herself arrived and the ceremony got under way. Because then it would be way too late.
But what about my trial?
Camilla had instructed me to be invisible . . . wallpaper . . . I definitely wasn’t supposed to have a mind of my own.
I was already over-stepping the mark by turning my back on her increasingly frantic signals, as she tried to attract my attention. If I blew the whistle on the bride, and the groom cancelled the wedding, I’d be sacked, no doubt about it.
Without a wedding, there’d be no album to design. No follow-up orders. And it would all be down to me.
I closed my eyes miserably, seeing all my dreams going up in smoke.
‘Are you okay?’ Jonathan asked.
I opened my eyes and looked into his open, trusting face.
And I made up my mind. ‘Can I have a private word?’
He looked surprised. Then he glanced at Lewis, who didn’t look too pleased, but shrugged as if to say, feel free.
We walked over to the window. I couldn’t believe what I was about to say to him on the morning of his wedding. But I had no choice.
The room was filling up with the excited chatter of wedding guests. The registrar had arrived and the quartet were tuning up their instruments.
I didn’t have much time.
Taking a deep breath, I put my hand on Jonathan’s arm and said there were a few things about his bride-to-be that he really ought to know…