The Things We Do For Love by Alice Peterson 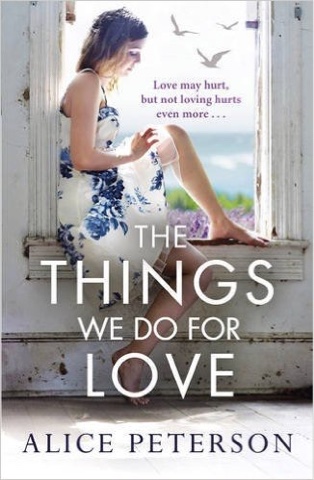 Love may hurt, but not loving hurts even more . . .January Wild loves her daughter, her dog Spud and her childhood home by the sea.Single parenting is tough, but January has no regrets. She has a job she loves, a happy home and the support of her beloved grandfather. The arrival of a new boss, however, threatens to shake up January's safe world.Ward Metcalfe loves great sales results and a well-run office.Everyone at her office agrees: Ward is a soulless, corporate slave driver. Even Spud, the company mascot, dislikes him.A secret stands between them. Yet over time January sees there is more to Ward than meets the eye. Rumours circulate. What exactly is he hiding? and is January prepared to risk everything to find out?

I'm knew to reading an Alice Peterson novel but I've seen good things about her down my Twitter newsfeed and on other blogs that I follow, so when I saw I had the opportunity to grab a copy of The Things We Do For Love I took that chance.

The cover, firstly, is summery and fresh and when you start reading about the Beach House it makes perfect sense.
Secondly, the synopsis had me intrigued... "A secret stands between them" it said and being the nosey  mare I am I just had to read on...

The book starts with a prologue introducing us to January, the main female character and her quest to find somewhere suitable for her and her unborn baby to live and U.S. Getting to know her instant dislike for estate agents!
We then jump to 2011, eight years later and January is off for a job interview. We a also introduced here to her daughter, Isla, who in herself is a massive character in the story.
The next few chapters jumps us back and forth to times over the last eight years as we get to understand January and Isla's story...
Without giving too much away, January is a single mum as Dan did a runner when she announce she was pregnant, over the first two years of Isla's life, Jan notices something different about her. After a battle with doctors and specialists, they finally get a diagnosis. Jan feels that a life changing operation for Isla is the only way for them to move forward and she relies heavily on the support of her grandparents whom brought her and her brother Lucas up after their parents tragically died.
Lucas is very shut off from his family and when Dan suddenly appears back in January's life she wonders if she really got over her feelings for him.

Fast forward, and January successfully gets her job and the book progresses in the present day. When her boss retires in comes Ward and there is an instant attraction between them but she can sense that he is holding something back and try as she might he won't budge on giving the details.

Eventually they talks it out and Ward confesses his marriage is over and the reason why, again I'll be vague as not to give it away. When January's remaining grandparent passes away he is a pillar of strength to her when her and Lucas fall out, her emotions running high and him keeping his heart under lock and key.

At the end of book there is a really humbling outcome involving January and Ward, Dan and Lucas when they attend presentation at Isla's school... I may have had a watery eye by this point!

The Things We Do For Love is a well written story with great details on places and locations, not to mention subjects including bullying and divorce.
Love and loss play a huge part in more ways than one but overall I found this a really enjoyable read and I shall certainly be looking out for more of Alice's work in the future.

I would like to thank Alice Peterson and the team at Quercus Books for approving a review copy via NetGalley. This is my honest opinion.