Blog Tour: Quintessentially Yours by Linn B Halton

Today is my stop on the blog tour for Quintessentially Yours, the new book from Linn B Halton. I would like to thank Brook Cottage Books for supplying a review copy of the book in return for the blog post and honest review.
Quintessentially Yours is the sequel to Under the Stars
Genre:Chick lit/romcom
Release Date: 5 August 2015
Publisher: Endeavour Press 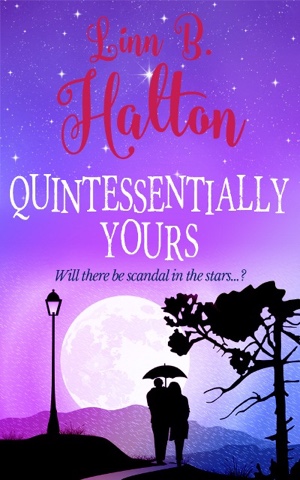 Katherine Dale lives her life according to her daily horoscope forecast. Having recently hit forty, Katherine is living with her partner, James Kingman, and their delightful little six-month-old daughter, Leyla.
James is an up-and-coming name in astrology and that’s how they met. At a party to celebrate the publication of Katherine’s first novel, James was about to propose when Katherine announced the news that she was expecting a baby. ‘Ask me later, when I can fit into my dream dress’ she’d told him.

Wind forward thirteen months and while there is an engagement ring on Katherine’s finger, James still can’t mention the ‘m’ word. Leyla suffers from colic and won’t settle into any semblance of a routine. The lack of sleep is taking its toll on them all.
James is at his wits’ end trying to cope with his increasing workload, while handling a hormonal woman who feels like an abject failure. And then there’s his boss, who has designs – on him!
With feline help from No. 4, plus a little timely advice from old postman Tom and neighbour Ed, can James and Katherine’s love for each other survive all of the challenges that life is throwing at them? Will there ever be time to plan that dream wedding?
This sequel can be read as a standalone novel.

About Linn B Halton

Bristol-born Linn B. Halton lives in the small village of Lydbrook, which nestles on the edge of the Forest of Dean, in the UK. She resides there with her husband and feline with 'catitude'- Mr Tiggs.

Linn began writing in March 2009 and her debut novel was published in February 2011.

In a recent interview Linn was asked about genres:
"From a very young age I knew romantic fiction was always going to be my genre. I am, and will always be, madly in love with love! Whether that's love of life, a partner, or the things I'm passionate about.
My stories are about love, life and real relationships - but romance is always the one thing that holds each story together. Often there's a light, psychic touch and I never dreamed I would write drawing upon my personal psychic experiences. But as my interest and understanding in the subject has grown, it is now such a part of my life that it finds its way into my fictional tales. However, what is heartening is that most of my experiences have been uplifting and it's wonderful to know loved ones are around me always. I hope it will make readers stop and wonder 'What if?'

The result is that I get a lot of mail from readers who have had similar experiences and some are sharing theirs for the first time with me. I always feel that's something rather special and for which I'm very grateful."
Love, life and beyond... but it's ALWAYS about the romance!
Linn is published by Choc Lit, HarperImpulse, Endeavour Press and Sapphire Star Publishing.
Linn is also the managing editor of Loveahappyending Lifestyle emagazine.
Website/blog: http://linnbhalton.co.uk/
Twitter: @LinnBHalton FB: Linn B Halton Author
Loveahappyending Lifestyle emagazine:
http://www.loveahappyending.com/
Linn’s Books on Amazon: http://smarturl.it/LinnBHaltonbooks

My Review
Having recently just read Under The Stars, the details were still fresh in my head and I therefore loved going back into the lives of Katherine, James and Mark who you may remember from my previous  review of Under The Stars.

As with the prequel to this book, the story is made up with lots of chapters coming from the perspectives of the trio and for me, we got into the story much more quickly than the first book which is a bonus!

We pick up from where the story left us and boy has a lot happened!

Katherine and James have welcomed a baby girl, Leyla, into their lives but are struggling with the day to day changes.
Katherine's still writing her novels although they have been a bit of flop and she is feeling the pressure to come up trumps on her next book primarily as she has moved in with James into his cottage and her funds are running rather low.
James on the other hand remains cool, calm and collected- or does he? He starts to over think things and has to battle with inappropriate comments from his and Mark's college Phiillippa. As he thinks things might start to calm down, Mark suggests making him a partner in the business which only adds more to his work load and strain.
Meanwhile, Mark has sadly become widowed and struggling to find a new path in life, when he confides in and asks Katherine for help she obliges despite having to keep it a secret from James.

The story leaves you questioning the lives of the three characters and when a reporter starts snooping around I feared that history would repeat itself.

There is, as I said, a lot squeezed into this story but it is well written had threw in a few surprises too.
Again, there is a lot of well researched knowledge of astronomy and astrology which comes across clear enough to understand so that you weren't swamped on a subject that is so vast.

All in all, this was another good, light hearted read from Linn B Halton. 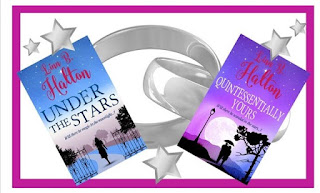