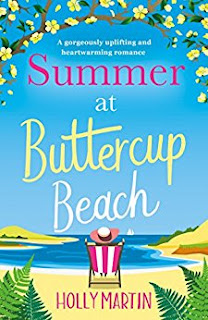 For two years Freya Greene has hidden the fact that she’s totally and utterly in love with her best friend Rome Lancaster. It’s not been easy – they work together in his glasswork business, she lives above his workshop and, he’s completely gorgeous. But Rome has never shown any sign of returning those feelings. Until now…
Lately they’ve shared affectionate touches and words heavy with meaning. Yet Freya knows Rome has a damaged heart. After losing his fiancé in a tragic accident, he’s not allowed himself to fall in love.
Freya has already had her heart broken by a man who couldn’t let go of a past love. Can she risk it happening again? Rome and Freya have a friendship that could blossom into something more. Are they both brave enough to take that chance?

I am seriously running out of words to review Holly's books with!

Summer at Buttercup Beach is the second novel in the latest
Hope Island series and features three siblings.

We've already met Bella in the first book, Spring at Blueberry Bay, and followed her romance with Issac, but we were also introduced to her siblings Rome and Eden.

Summer at Buttercup Beach is the turn of Rome's story although I must point out that each of the books can be read as stand-alone novels and in any order,

Rome and Freya have been working together for two years and have formed a strong friendship, however Freya's feelings have moved towards love which is a big step for her since having her heart broken, and although Rome won't admit it - it seems the feelings are mutual!

Over the course of a few weeks and a lot of flirting, Rome eventually takes Freya out on a date.
This of course should be all lovey dovey, however a proposal of the wrong kind sets Freya up for even more heartache.

What follows is a tale of finding your feelings and taking risks with your heart.

Summer at Buttercup Beach has lots of ups and downs, deep conversations, past ghosts and lots of sex talk!

As Freya and Rome get closer, something happens to jeopardise what they could have, until eventually Rome admits his feelings, but again things are taken out of context leaving Freya feeling the only choice is to flee the island - can Rome catch her in time?

Well you are just going to have to grab yourself a copy of this feel good romance story and find out for yourself.

What I will say though, is reading a novel by Holly Martin is sure to leave you feeling warm and fuzzy. Despite the ups and downs of the sub plots her books will certainly whisk you away for a few hours!