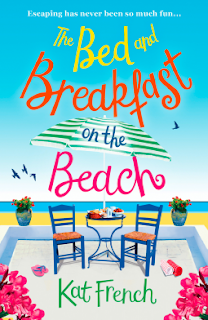 A gorgeous summer read to escape with this summer!
Three women throw caution to the wind and move from England to run a B&B on a Greek island.
They’ve all reached a point in their lives when they need a change – one divorced, one empty nester, one made redundant from the job she’s held since leaving school many moons ago.
The move tests their friendship to the limits, brings errant husbands running, and offers new opportunities for love. Each of the women go through their own metamorphosis, but will they choose to stay in Greece when the holiday season winds down?

Last year Kat French brought us Robinson Duff in her sexy summer novel, One Hot Summer.
This year's novel, The Bed and Breakfast on the Beach sees us treated to Jesse, an Australian art sculptor and Angelo, a grumpy yet handsome Greek!

OK, so the book isn't primarily about them but its certainly one bonus to it... that and the Sun, Sea and.... Gin!

The book focus' around three friends, Winnie, Frankie and Stella and starts with them all jetting off to the Greek Island of Skelidos for some girl time. Quickly moving on it is clear that after one too many gin's the girls have ended up purchasing the B&B - Villa Valentina.

That in itself comes with huge responsibilities - a donkey that has vacated to the neighbouring farm and strict intrustions to keep alive the sacred gin recipe which is supplied to the locals.

As the story unfolds we get to know each of the girls that little bit more -
Winnie, nursing a broken heart
Frankie, getting over a divorce
Stella, lost her job.

Villa Valentina is set to be a new start for each of them and they soon fall into their roles of running the place. As Winnie tires to befriend their donkey she gets closer to Jesse their neighbour but after blowing hot and cold signals, Winnie just can't work him out.
Stella is the brains of the business and gets going on a swanky new website but her patience run thin with Angelo, a grumpy and rude, yet sexy customer
And Frankie is in charge of the kitchen - trying out new recipes and wondering where her marriage went wrong, the last thing she expects is to see her ex arrive at the B&B!

I thought that The Bed and Breakfast on the Beach was going to be all sun, sea and steamy nights but it has a lot more drama to it too - their first booking other than Angelo turns out to be a well know pop group looking for a hideaway to work on their next album.

But no sooner as things look up for the girsl, things quickly go horribly wrong too with one of the band members being an alcholoic and setting the place on fire.

throughout the book we are left wondering if the girls will get their happy ever after on what is a book about friendship, love, challenges and discovery.

The Bed and Breakfast on the Beach is the perfect poolside read to take away on your travels this year!