Today I'm delighted to be sharing a guest post from author Lottie Phillips as part of the blog tour for her novel, The Little Cottage in the Country. 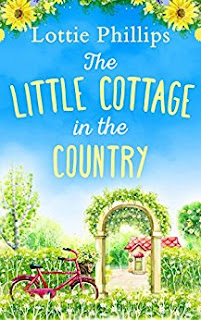 Anna Compton thought that moving to the countryside, leaving London and her past firmly behind
her was the perfect solution. Goodbye life of thirty-something, crazed single mum of two, hello
country glamour queen, domestic goddess and yummy-mummy extraordinaire.
But her new life at Primrose Cottage isn’t quite what she expected! Very soon she’s chasing pork
pies down hills, disguising her shop-bought cakes at the school bake sale – and trying to resist oh-
so-handsome Horatio Spencerville, who just so happens to be the Lord of the Manor…
Could moving to the country be the biggest mistake she’s ever made?

When I started The Little Cottage in the Country I
knew that the role of Anna as mother would be of
utmost importance. Especially as her own mother,
Linda, would be coming to live with her.
Anna, just like me, wants to protect her children and
feels constant ‘mummy-guilt’. Am I doing the right
thing? Am I doing enough? Every mother has
experienced it; any mother will say it never goes
away.
So when Anna decides to leave London she is faced
with the biggest dilemma of all: ensuring that Freddie
and Antonia settle in.
The twins were such fun to write. They have big
personalities and provided so much of the humour.
Let’s not also forget how much comedy (and
embarrassment!) can come from taking children to
nursery or school. The fêtes, the bake sales, the talent
competitions…
But whilst we’re squirming with the odd hierarchy of
yummy-mummies, the joy of children is they can
quite often see past the detail and enjoy the moment
for what it is. They make the most of whatever is
thrown their way.

My son can pick up any item – this morning’s being a
watering can – and it will suddenly become a rocket
or a car. Or I can be pulling my hair out over
something – spilt milk etc. – and he will start laughing
or do a funny dance, putting it all into perspective!
So here is a picture of my son in our laundry basket
going tobogganing… indoors. Yes, he was inside with
the radiator blaring but he thought, ‘This looks fun!’

Charlie Phillips, writing under the pseudonym Lottie Phillips, worked as a teacher before turning
her hand to fiction. She was brought up in Africa and the Middle East and then - as an adult -
travelled extensively before moving to London and finally settling in the Cotswolds with her
partner and toddler. When she’s not writing, you will find her scouring interior design magazines
and shops, striving toward the distant dream of being a domestic goddess or having a glass of
wine with country music turned up loud. As a child, she always had her nose in a book and, in
particular, Nancy Drew.

The Little Cottage in the Country is Charlie's debut romantic comedy. She is very excited to be
sharing Anna Compton's hilarious story with you! She also writes psychological thrillers under the
pseudonym Louise Stone, including the best selling novel, S is for Stranger.