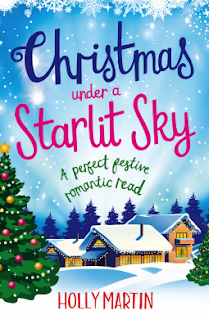 Step inside a beautiful winter wonderland where love, laughter and cosy nights by the fire will make this Christmas one to remember. Neve Whitaker loves managing the Stardust Lake hotel. She gets to work alongside her wonderful family and she’s spending Christmas on the most enchanting, snow-covered island in Scotland. So why is her heart so heavy this festive season? It might have something to do with the gorgeous actor Oakley Rey, the man she finished with before he left for California and the man she loves more than anything. With Oakley’s career in Hollywood soaring, Neve is convinced she’d only hold him back. She had to end it with him – at least that’s what she keeps telling herself. But now she has a secret she’s struggling to keep, and when Oakley arrives on Juniper Island determined to win her back, Neve is thrown off balance. Will Neve’s fear of having her heart broken again push Oakley away for good, or is it time for her to take a leap of faith? Get swept away by this deliciously sweet and heartwarming tale, and spend an unforgettable Christmas on Juniper Island.

Its no secret that Holly Martin has become one of my favourite authors - you only have to read my recent review of the first book in this A Town Called Christmas series, Christmas Under A Cranberry Sky, in which you can access here - to know that I've fallen for Holly's festive fictional world.

With its colourful Northern Lights, glistening snow, cosy wooden lodges and a wonderful cast of characters, it's no wonder that Holly Martin is having the success she's getting as I truly feel that her books are pure escapism for us romance genre lovers.

Although Christmas Under A Starlit Sky is the second book from the series, it can completely be read as a standalone novel - although if you were to take my advise, I would read Cranberry Sky first as for me it gives you a better understanding of Juniper Island and works well as a nice intro to the books.

Whereas in the first book the focus was primarily on one relationship - Gabe and Pip, with Christmas Under A Starlit Sky we are treated to two relationships - both cleverly crafted to entwine to make one complete story.

Christmas Under A Starlit Sky has four main characters - Neve, Oakley, Adam and Ivy - although there are plenty of references to the characters featured in Cranberry too.

Neve and Oakley's story is the main thread here but I adored reading Adam and Ivy's alongside. Neve is the manager of the Stardust Lake Hotel and has recently split up with her movie star boyfriend Oakley. When he suddenly arrives on Juniper Island just prior to Christmas, Neve is completely confused as to his feelings for her and their future together, especially when he blows hot and cold in reaction to a secret she has been keeping from him. This on/off chemistry between the pair really kept the book interesting and the pages turning with its twist and turns.

Adam has been brought to Juniper Island by Gabe to work as assistant manager with Neve gets the hotel up and running and to help guide it through their first Christmas and New Year period.
Adam comes with his own heartbreak but throws himself into his new role of which is not short of challenges, and one of them first challenges is to locate Ivy Storm, one of the local villagers that has gone missing.
From the moment Adam finds Ivy and discovers that she's not the elderly lady her name suggest, you can feel their chemistry jumping from the pages - as I read on I was left wondering if their broken hearts could be mended and if they could learn to trust each other in order to be happy.

Christmas Under A Starlit Sky is a story full of hopes and dreams, love and romance and of course that festive warmth you want from a Christmas story, so grab yourself a hot chocolate (marshmallows a must!), a snuggly blanket and curl up with what is my favourite novel of the season so far!