Today I'm delighted to be on the blog tour for The Christmas Promise by Sue Moorcroft and with thanks to Avon Books, I'm bringing you a little teaser from the book!

Below you will find the cover, synopsis and extract... be sure to check out the other amazing bloggers on this tour too! 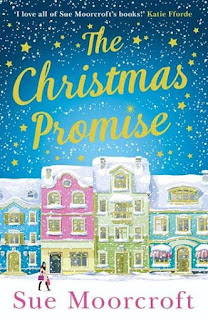 For Ava Bliss, it’s going to be a Christmas to remember …

On a snowy December evening, Sam Jermyn steps into the life of bespoke hat maker Ava Blissham. Sparks fly, and not necessarily the good ones…

When Sam commissions Ava to make a hat for someone special to him she makes a promise that will change her life. She just doesn’t know it yet.

Ava needs this job – she’s struggling to make ends meet, her ex-boyfriend is a bully, and she’s desperate for distraction because no one dreads Christmas like Ava does.

But soon Ava finds herself reluctantly needing something from Sam. He’s quick to help, but she’s in for a nasty shock… Will she be able to keep her promise? And if she does, might this be the Christmas her dreams come true?

Curl up with this gorgeous, festive read – the perfect treat for fans of Katie Fforde, Carole Matthews and Trisha Ashley. 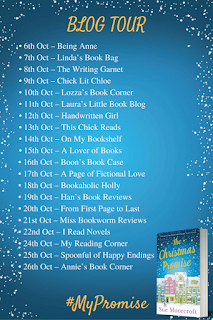 Ava had to raise her voice to be heard over the Christmas revellers and pulsing music. ‘So I get to meet Sam the Big Important Man tonight?’
‘He’s over there’ – Izz was tall enough to see above people’s heads – ‘with Patrick and Jake. I can see some of the girls, too, over in the corner. Nobody else seems to have brought guests,’ she added uneasily, doing the looking-without-looking thing that was more obvious than staring.

Ava gave her arm a reassuring pat. ‘But you were told you could. And I can always disappear off home if you think I’m in the way.’ She paused to check the angle of her black-feathered pillbox hat fixed to the coil of blonde plaits at one side of her head and made sure that the rest of her hair streamed smoothly over her shoulder. No point turning herself into a walking display of her work if she wasn’t meticulous with the effect.
‘No!’ said Izz in alarm, fluffing up her short hair, a pretty brown that, in Ava’s opinion, could do with a more exciting cut. ‘If you go home early I’ll have no one to talk to.’
‘What about Tod?’
‘He’ll talk to the others.’ Izz glanced back at the door, as if contemplating baling out before the evening began.
It wouldn’t help Izz if Ava were to demand to know how she could be shy with people she’d worked with for weeks, so Ava simply said, ‘OK, let’s pile in.’
Without the benefit of the height enjoyed by Izz and Tod, Ava was corralled by backs and shoulders as they battled through the melee, and could only gauge that their goal had been reached by a sudden chorus of, ‘Hey, Tod! Hello, Izz.’
Izz hung back, allowing Tod to tug Ava forward. ‘Ava, meet Patrick and Jake.’
Patrick had dark eyes, crisp curls and the kind of smile that was probably supposed to be a smoulder. Jake was more of a vague beamer.
Ava smiled politely. ‘Hello, I’m Ava—’
‘And,’ Tod barrelled on as if he couldn’t wait to get to the important stuff, ‘this is Sam, our creative director.’
Ava hadn’t intended to be impressed by Sam Jermyn, the golden boy who’d handled PR for a high-profile foot­ball player and, at thirty-five, made enough money to invest in his own communications agency. But as Sam turned his gaze on her she couldn’t help but be aware of him. He was tall, even taller than Tod or Izz. His tawny hair fell across one eye and was just long enough to tuck behind his ears. In his dark suit and white shirt he looked as well put-together as an expensive car.
With a slow smile, Sam took her hand in his. ‘Ava. I’ve heard a lot about you.’
‘Likewise.’ She smiled sweetly. She wouldn’t embarrass her friends by telling Sam that Tod and Izz sometimes seemed to have no other topic of conversation.
‘What are you drinking?’
‘Thank you, but I’m not feeling flush enough to get involved in rounds. I might only stay for a couple, anyway.’
‘You’ve been invited for Christmas drinks. No need to reciprocate.’ Sam consulted Tod over Ava’s head. ‘What does Ava drink?’
‘Zinfandel rosé.’ Tod cheerfully ignored Ava’s exasper­ated stare.
‘It’s not PC to dismiss a woman’s perfectly valid wishes,’ Ava half-joked at Sam’s departing back as, having swiftly taken orders from Tod and Izz, he made towards the bar.