Review | All I Want For Christmas ~ Jenny Hale 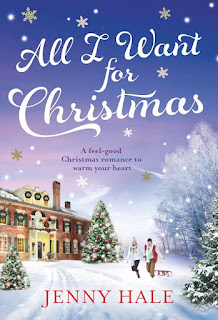 Christmas comes once a year . . . But true love comes once in a lifetime.

Snowflakes are falling, there’s carol singing on every corner, and Leah Evans is preparing for a family Christmas at her grandmother’s majestic plantation house in Virginia. It won’t be the same now that her beloved Nan is gone, but when Leah discovers she has inherited the mansion, she knows she can give her daughter Sadie the childhood of her dreams.


But there’s a catch. Leah must split the house with a man called David Forester. Leah hasn’t heard that name in a long time. Not since they were kids, when Davey was always there to catch her.


Now David is all grown up. He’s gorgeous, successful, and certain of one thing: Leah should sell him her half of the house.


They can’t agree, but as they share memories over wine by the log fire, Leah notices a fluttering in her stomach. And by the look in his eyes, he’s starting to feel it too.


Will it be Leah or David who must give up their dreams? Or, with a little bit of Christmas magic, will they finally understand Nan’s advice to them both about living life without regrets … and take a chance on true love?

There is no question that Jenny Hale knows how to write those kind books that make you grin and make you cry but overall leaves you feeling warm and contented as you you turn the pages.

All I Want For Christmas is no exception, Here Jenny treats us to a warm and humbling story about love, life and friendship.

We are introduced to Leah Evans and her young daughter Sadie in the run up to Christmas. The relationship between these two characters is adorable right from the outset and it is clearly obvious that the recent passing of Leah's Nan is playing on their minds as they prepare to head back to Evergreen Hills - the old plantation that Nan transformed in to a glorious family home.

The house is also set to be a massive part of Leah and Sadie's future as they had always planned to move and live there and carry on opening the plantation up to host events and weddings just as Nan had. Sadie's passion is gymnastics and there is also an amazing school to teach this near by.

However, their well thought future gets turned upside down when Leah receives a letter stating that Nan had changed her Will prior to her passing and that the house was to be split between Leah and David Forester.

Leah and David knew each other when they kids - Leah looked up to him and he looked after her but David and his family moved away and Leah hadn't thought much of him since.
Now they are faced with the prospect of being joint home owners.

Everything Leah has worked and planned for is destroyed when David says he wants to buy her out - over the coming chapters little things remind Leah of Nan and the memories that had at the plantation. All the while she is building up a way to tell Sadie they aren't moving, and trying to hold back the feelings she's starting to have for David.

Alongside all of this there is a really strong and powerful element of friendship in the form of Leah's two friends Roz and Louise and their children Jo and Ethan respectively. The Girls as they are affectionately known have been there as a little trio through thick and thin and they are Leah's rock when it comes to making a decision on Evergreen Hills.

Although there is a small romantic element between Leah and David in this book - and Jenny is brilliant at her romantic stories - this book has much more to it. There is a deep line of moving on past grief and the importance of living life with no regrets. There is also a mysterious element as we learn quite early on that Nan sent a letter to someone named Samuel but we had to keep guessing until much later on.

For me personally though, I felt that the relationship between Leah and David could have panned out a little better. They seemed to go from friends to something more without much in the middle and I missed they way Jenny usually writes making her characters flirt and fall in love.

Overall though, I really enjoyed All I Want For Christmas - it was humbling, warm and cozy and had plenty of festive links and lots of snow!