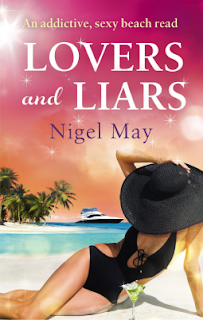 Welcome to the Velvet Hotel Barbados where money and sex go hand in hand with murder ....


When Millionaire playboy Sheridan Rivers is found dead at his luxurious hotel on the paradise island of Barbados, there are several suspects in the frame…


Sutton: Sheridan’s long-suffering wife was permanently pushed aside for his younger lovers. Was it time for her to make a stand?


Kassidy: Sheridan’s assistant longs to be wealthy in her own right. Employed for her sexual and organisational skills, could she have had her eyes on a bigger prize?


Nikki: Sheridan’s oldest daughter has done something really bad that her dad has discovered. What price will she pay to keep his silence?
Heather: The apple of her father, Sheridan’s eye. But her father was responsible for a terrible tragedy that turned her world upside down. Is the time ripe for revenge?
Four women, each with a cross to bear – all waiting for the perfect moment to get even...

This summer, pour yourself a glass of bubbly and escape with the elite to the golden beaches of Barbados for a sexy, scandalous romp that you won’t be able to put down.

It's no secret that I am a massive Nigel May fan since discovering him last year with his novel Scandalous Lies. which you can read my review of here. I immediately went and brought his two previously published novels, Trinity and Addicted, but as often with book bloggers and reviewers, there are always new books being published and so these are sat waiting patiently on my TBR - Sorry Nigel!

Well let me tell you right away - the man is a glam fiction genius!

Before I get too engrossed in this review, be sure to check out the giveaway at the end. I had great pleasure in meeting Nigel a few weeks back when he came to Southampton to do a talk about Lovers and Liars for a charity that he is involved with. Nigel is genuinely a warm, caring, grounded man. It was lovely to chat to him about all things books and blogging and not only did he take the time to speak to everyone there at length, he also very kindly provided me with some signed bits to run a giveaway with - thank you Nigel!

Myself, Nigel and my friend, Steph.

Lovers and Liars then - jeez what a story.

What I loved about this story is that right from the outset we know that there is a murder with billionaire Sheridan Rivers being the culprit. His murder is detailed in the prologue of the book where we are introduced to Sheridan and all of the suspects as they gear up for the boxing fight of the year at one of his glamorous Velvet Hotels.

What we obviously don't know is who killed him  - or why.
Post prologue, Nigel May takes us on a journey starting a few months prior to the murder, giving us backgrounds on the group of characters he has created and as time passes on and events unfold we are left wondering who the killer is, as Nigel has expertly written the story so that each suspect has valid motive.

I'm not going to spoil anything by saying who the killer is, but I will say I did have my suspicions about said person!

Lovers and Liars has a great character cast and I adore the wonderful names Nigel comes up with - keep your eyes peeled for one you may recognise in a future book ;-)

Nigel May has a great way of taking a small handful of characters, each with their own sub story lines detailed greatly in the beginning of the book. I was wondering how the bigger picture linked them together but as you read on, all becomes clear and it works.

It just bloomin' works with lies and affairs, secrets and deceit and of course the sex and glamour we come to love in a Nigel May novel.

I loved the female characters of the story - Sutton, Nikki and Heather in particular. Sutton is Sheridan's long suffering wife with Nikki and Heather their daughters and despite the fabulous live Sheridan's money can buy them, at times of the book they showed real vulnerability and really depended on each other.
I didn't particularly like Sheridan, he was a bit money arrogant but I felt he was created to be like this so I didn't feel bad for long. Equally I didn't feel bad for his PA Kassidy either - there was something sly about her in the first half of the book which is proved in the second half.
I also enjoyed reading about Hatton and Fidge - Boxer and Manager, and their secret love for each other. I definitely feel we need more appearances from DJ Blair though!

Overall, Lover and Liars is what you want in a book - yes there are sexual scenes but this is balanced out with murder. There's lies balanced out with love. There's penthouse suits and private jets on exotic locations. A life millions of miles away from the ones most of us live.

Lovers and Liars is pure escapism, a complete page turner and full of unexpected twists and turns.

As mentioned earlier, I have a wonderful Nigel May giveaway for 3 lucky winners.

I have three Nigel May prizes to win - Please note these are UK only.
1: Signed Trinity book
2: Signed Scandalous Lies book
3: Signed extract from Lovers and Liars

Giveaway ends midnight on Thursday 14th  July and winners will be notified by email.


a Rafflecopter giveaway
Posted by Unknown at 00:30:00