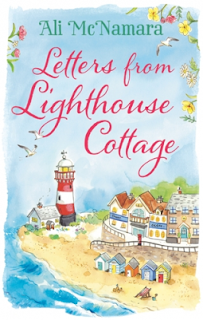 The sun is shining in the quiet little seaside town of Sandybridge
Sandybridge is the perfect English seaside town: home to gift shops, tea rooms and a fabulous fish and chip shop. And it's home to Grace - although right now, she's not too happy about it.
Grace grew up in Sandybridge, helping her parents sort junk from vintage treasures, but she always longed to escape to a bigger world. And she made it, travelling the world for her job, falling in love and starting a family. So why is she back in the tiny seaside town she'd long left behind, hanging out with Charlie, the boy who became her best friend when they were teenagers?
It turns out that travelling the world may not have been exactly what Grace needed to do. Perhaps everything she wanted has always been at home - after all, they do say that's where the heart is...

Letters From Lighthouse Cottage is my first ever book from Ali McNamara and having just finished it, I have to say I'm feeling slight mixed emotions.

I've seen lots of positive praise for Ali's work and when I saw this cover and read the synopsis I knew it was one that I just had to read.

Letters From Lighthouse Cottage starts off in the summer of 2016 with the main character, Grace, at Sandybridge Hall. Instantly we are thrown into the world which surrounds Grace and I love the sunny sea side location in which the book was set within. The story is then separated into four parts - part one is based in June 1986, part two is December 1992, part three throughout 2001 and then part four in August 2012.
Summer 2016 is featured again at the end and also in between each of the parts - for me this worked really well as I'm not a huge lover of books throwing you back and forth with every chapter.

Throughout each of the sections, we are told via Grace her life story, starting right back in her teenage years where she meets Charlie and Danny, her two best friends. Danny becomes her first love but as time goes on they drift part. Grace wants more to life that living in Sandybridge working at her parents antique shop and as the story unfolds we find her going off to university and then abroad to work. But, something keeps pulling her back to Sandybridge where Charlie and Danny have remained.

What was really lovely about this book is the friendship and bond Grace has with both Charlie and Danny.  Right from the night they all met they have been actively involved in each others lives and regularly caught up when all back in the seaside village. Charlie remained to stay and take on his parents' business whilst Danny was forced to remain due to events which are mentioned in the book. Ultimately Letters from Lighthouse Cottage for me felt like a really good love story - right up until the end, I knew who I wanted out of Charlie and Danny to make Grace happy, but I wasn't convinced due to Ali's great writing.

Along side all of this was Remy who came into Grace's life fairly early into the book and had been leaving letters as guidance to Grace. The imagination of this books reminded me a little of the early work by Cecelia Ahern however I felt that there was something missing from the execution. I felt that there could have been more 'Letters from Lighthouse Cottage' as the title suggests, and I feel I was missing a little more mystery surrounding the situation.

Huge thanks to the team at Little Brown for supplying a NetGalley copy of
Letters From Lighthouse Cottage
in return for an honest opinion.