Review: You and Me, Always by Jill Mansell 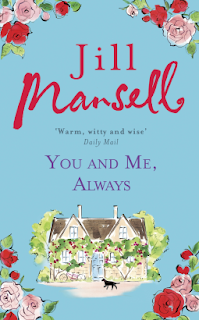 You and Me, Always is published by Headline January 2016.
Pre-Order Kindle
Pre-Order Hardback

On the morning of Lily's twenty-fifth birthday, it's time to open the very last letter written to her by her beloved mother, who died when she was eight.
Learning more about the first and only real love of her mum's life is a revelation. On the same day, Lily also meets Eddie Tessler, a man fleeing fame who just might have the ability to change her world in unimaginable ways. But her childhood friend Dan has his own reasons for not wanting Lily to get too carried away by Eddie's attentions.
Before long, secrets begin to emerge and Lily's friends and family become involved. In the beautiful Cotswold village of Stanton Langley, nothing will ever be the same again...

For a long time now, Jill Mansell has been a favourite author of mind.. She's kind of like my go to lady. If someone wants a book recommended, I say 'Have you read one of Jill Mansell's? You so should!'
If I'm finding myself in a little reading slump then its Jill's books I turn too - I can read them over and over again and never get bored.

There's something magical about Jill's writing, the way she takes a handful of characters and gives them all a unique storyline, yet having them all come together in one way or another, and the way that the reader is just aching from smiling the whole way through.

In You and Me, Always the story is very Classic Jill, and I mean that in a totally good way - its what she does and she does it simply brilliantly.
Lily is the prime character, she's had a good life but its winged with sadness as her mother passed away when she was young. She was brought up by her mothers friend, Coral and her late husband Nick. Lily's best friend is Dan, the younger brother of Patsy who was her babysitter and now good friend.

The books takes us on a journey of the characters finding love, Lily and Dan in particular who are both hiding their true feelings from the world, Coral who is wondering on whether she can love again after losing Nick and Patsy who has had a string of dates what are comical and awful yet always an experience.

When film star Eddie walks into their lives he forms an instant attraction to Lily, but this leads to events about her biological father that she would rather not have to deal with, especially as he remembers nothing about her mother - unlike Declan, her mothers first love and someone who remembers everything!

Each of the character's are linked in someone and the story flows perfectly as we get to know them. There are some really comical scenes such as Patsy's date with the bike and Lycra, and some really moving parts such as Lily getting the final letter from her mother.

Although there are a few characters each with a story to tell, Lily as I said is the main one and I adored her and Dan, both as teenagers when the book took you back, to the great friends theu are with loads of one liners and plenty of banter - I was just willing them to just be honest and tell each other how they really felt throughout and kind of did a 'air fist pump' celebratory motion when the book took us there.

You and Me, Always is an adorable story about love, life and friendship - and enjoyable all rounder. If you haven't read any thing from Jill Mansell then I have to question why and can 100% recommend this book (and all her others of course!)

I would like to thank Headline and NetGalley for a review copy of You and Me, Always.
This is my honest opinion.