Today I'm reviewing Return Of The Christmas Spirit  by Susan Buchanan for its blog tour hosted by Brook Cottage Books. 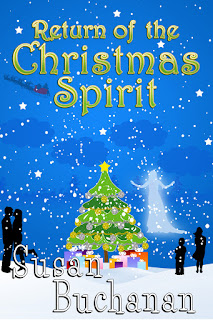 Christmas is just around the corner when Star begins working at Butterburn library, but not everyone is embracing the spirit of the season.
Sixteen-year-old Arianna’s mock exams are looming and she’s feeling under pressure. With her father living abroad and her mother working three jobs, she doesn’t have much support at home.
The bank is threatening to repossess Evan’s house, and he has no idea how he’s going to get through Christmas with two children who are used to getting everything they want.
Patricia’s cliché of a husband, after 23 years of marriage, has announced he’s moving out of the family home, and moving in with his secretary.
Daniel is doing the work of three people in his sales job, as well as looking after his kids and his wife. Pulled in too many different directions, he’s feeling stressed out.
Can Star, the library’s Good Samaritan, help set them on the path to happiness this Christmas?

Return Of The Christmas Spirit has the makings of a really great heart warming festive read.

In the book there are four main characters - Daniel, Evan, Arianna and Patricia.
Daniel is the father to three young children, he's got a good job but is under pressure as his team are a few men down, and his wife at home is unwell spending all her time in bed leaving him to sort the kids and the household chores too.

Evan, again a family man but lost his amazing job a few years back and is struggling to find another and to make ends meet. Despite having a loving and understanding wife he just wants his luck to change so they can have a nice Christmas.

Arianna, a sixteen year old student spends all her time studying. Its just her and her mother since her dad left, and due to tight finances she's had to give up her social interaction with friends and is feeling lonely.

And then there's Patricia, who's husband has left her for his secretary but with her best friend and colleague being on maternity leave she feels alone with no one to talk to and wondering how she can move forward in her life and learn to become independent.

The book is has a main common feature which is the library where Patricia is manager. Star, the Christmas Spirit, has been 'employed' in the build up to Christmas and to cover the maternity leave - obviously unbeknown to the four characters, she's actually there to help them.

For me, the book was hard to get into. Each chapter was made up with a series of paragraphs, each one jumping from character to character - there are some really lovely, strong characters, however I felt I didn't really get to know them and therefore the story struggled to flow for me.

I enjoyed the fact that the four characters has the common library interest - Evan goes to job hunt, Arianna to study and Daniel takes his kids to story time, and so each one comes in contact with Star who magically makes things coincidently happen in order to improve all of their lives.

The last five or so chapters worked better for me, these were based on Christmas day which is the landmark the book has been leading up to, and each character was pretty much given a chapter to themselves.

Although this book is 'return of' the Christmas Spirit, it can be read as a standalone as there is only one or two brief sentences relating to waht Star was upto last year, and even the last chapter when she looked back at them was well written and was generalised so I felt I didnt need to have read the first book in order to understand.

As I mentioned at the beginning, this book has a really nice, light feel to it. I would have preferred to have had an epilogue at the end as I was left wondering what happened to Daniel's wife, did Arianne pass her exams, how Evan coped in his new job and if Patricia forgave her husband, but these are only my personal opinions.

I would like to thank Brook Cottage Books and the author for a review copy of this book in exchange for my honest opinion.

Susan Buchanan lives in Central Scotland with her partner, Tony, and their two children. She is the author of three other novels: The Christmas Spirit, The Dating Game, and Sign of the Times. Return of the Christmas Spirit is her fourth book. She is currently working on her fifth book, What If.

Susan is also a proofreader, editor, and translator, and when not working, writing, or caring for her two delightful cherubs, loves reading, the theatre, quiz shows, and eating out - not necessarily in that order!

GIVEAWAY
There are 2 giveaways associated with this tour
Visit Susan’s blog at www.susancbuchanan.blogspot.co.uk, where there will be a Rafflecopter giveaway for a £10/$15 Amazon voucher for the duration of the tour and the launch day itself.
Plus
Enter the tour giveaway to win an ecopy (x2) of Susan’s book THE DATING GAME