Guest Review: Christmas Ever After by Sarah Morgan 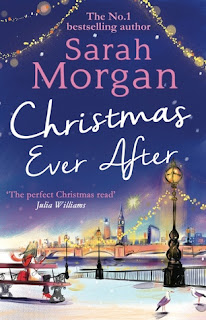 Jewellery designer Skylar loves living London, especially as the glittering Christmas lights sparkle all around.
But when a surprise proposal goes wrong she finds herself fleeing home to remote Puffin Island. Of course, the last person she expected to see was TV historian Alec.Burned by a terrible divorce, Alec is dazzled by Sky’s blonde beauty and so cynical that he assumes that’s a bad thing!
Luckily she’s on the verge of getting engaged to someone else, so she won’t be a constant source of temptation on Puffin Island...but this Christmas, can Alec and Sky realise that they are what each other was looking for all along?

Skylar is a dreamer, following her love of art, ceramics and jewellery she has her first collection on show in London where she would be joined by her high flying political boyfriend Richard, which her parents were overwhelmed she landed a successful boyfriend like that.
On the day, things do not go as expected and we see Skylar go on a journey which involves someone who turns up her show; that someone Alec who would be the last person she expects to see.

This book had be gripped from the get go.
I really liked how the book flowed and Skylar as a character, she had the girl power which I admired that if she wanted something she would go and get it.
Yes, there is a certain insecurities which made her feel more real, that she really wanted to make her parents proud.
The book itself is a bit of Christmas magic and sparkle which made me feel all warm and fuzzy.

I would like to thank Nicole for a fab Guest Review and the Publisher for a review copy via NetGalley in exchange for an honest opinion.