Blog Tour | Promo Post: Out Of Control by T.A. Belshaw

Its my stop on the Out Of Control Blog Tour hosted by Brook Cottage Books and I've got a promo post for you. 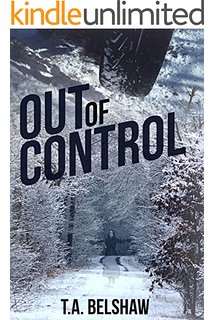 It began with a trivial moment of carelessness, but the shockwaves that reverberate from this seemingly insignificant incident, spread far and wide.
Ed and his heavily pregnant wife Mary are on an errand for Ed’s ailing father before the pair depart for warmer climes. But the winter of 1962 comes early and one innocuous event and a hastily taken decision will have devastating consequences for the family of young Rose Gorton. Mary’s already fragile mental state is put under further stress while Ed tries to make sense of events that are spiralling massively, Out of Control.

Trevor Belshaw, aka, Trevor Forest, is a writer of both adult and children's fiction. He lives in Nottingham, UK with his mad Springer Spaniel, Maisie. Trevor is the creator of Tracy’s Hot Mail (Crooked Cat Publishing,) and has recently released a noir novella, Out of Control.
Writing under the name, Trevor Forest, he has published fourteen children’s books including the Magic Molly series, The Stanley Stickle series, and Peggy Larkin's War.
Trevor’s short stories and articles have appeared in various magazines including The Best of British, Ireland’s Own and First Edition. His poem My Mistake was awarded a highly commended status and included in the Farringdon Poetry competition best entries anthology. His children’s poem Clicking Gran, was longlisted in the Plough Poetry competition 2009.
Trevor’s short stories have been published in many anthologies including the charity anthologies. 100 Stories for Haiti, 50 Stories for Pakistan, 100 Stories for Queensland, The Best of Café Lit, (2011 2012 and 2013) The Best of Friday Flash Volume 2, Another Haircut, Shambelurkling and other stories and 24 Stories for Advent.
Twitter @tbelshaw
Facebook Trevor Belshaw and Trevor Forest
Email trevor(AT)trevorbelshaw.com