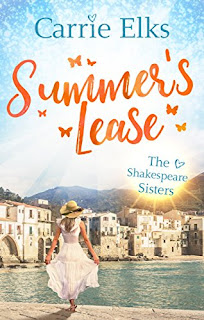 A free summer holiday in a beautiful villa in Lake Como. The catch? Sharing a house with her worst enemy . . .
Cesca Shakespeare has hit rock bottom. After one prize-winning play that ended in disaster, writer's block turned up, moved in and got a Netflix subscription. Six years later, she's just lost her crappy job and is about to lose her flat. Worse still, her sisters have no idea how far she's fallen. So when her fairy Godfather offers her a free summer holiday in a beautiful Italian villa, she grudgingly agrees to try writing a new play. That's before she finds out the house belongs to her arch-nemesis, Sam Carlton.
Having just hit the headlines for all the wrong reasons - again - Hollywood heart-throb Sam Carlton needs a place to hide out. Where better than his family's gorgeous empty villa on Lake Como? Except when he arrives, it isn't as empty as he'd hoped.
One thing's for sure - this is going to be a red-hot, scorching summer . . .

I have to start this review with an apology as it should have been done a fair few weeks ago, however life got in the way and when I came to picking up the book again I just had to re start it because Summers Lease is one of them books that you completely emerge yourself in and although I'd already read about 60% of the book, re reading it simply felt like picking it up for the first time.

Summers Lease I believe is the first of 4 books Carrie Elks featuring the Shakespeare sisters and we kick off with Cesca Shakespeare.

Cesca is down on her luck, for the past 6 years she's gone from job to job and losing the latest one - working in a cat cafe of all places - really does make her hit rock bottom.
Barely able to feed herself or pay this week's rent, Cesca is persuaded by her godfather Hugh to head to Italy for the summer.
Her role there is to house sit a villa owned by some of Hugh s friends whilst the current housekeeper take a holiday.

No sooner as Cesca arrives there she quickly realises that the villa is own by the Carlton family. Assured they won't be coming this summer Cesca agrees to stay on.... only one night she is rudely woken by someone entering the property. Sam Carlton.

Sam is an actor making quite a name for himself over the last  6 years and becoming one of Hollywood's hottest heartthrobs - however some bad press has forced him to leave the hustle of L.A. an head for a summers break at his families private and secluded Lake Como villa.

Things get off to a bad start between cesca and Sam - he can't understand why a girl he thinks he's  never met hates him so much but for cesca, Sam walking out as the leading role in her west end play all those years ago had  left herblaming him for her  unabiltoty to write  causing her to flit from job to job.

After a few heated conversations the pair eventually find some common ground and agree to at Least be amicable to each other... but that, along with the Italian heat, wine and good food leads to flirting and eventually more.

The couple get closer and closer and cesca opens up to Sam but every time the tables are turned she gets pushed away again leaving her heart broken when the time eventually comes for her to head home. Only after she has gone does Sam realise his true feeling for her.

Summers Lease is full of emotion. I felt like I was there with the couple as they fought and argues and Carrie wrote the sexual scenes with warmth providing just the right amount of details for your imagination.
The location and descriptions were stunning, forcing me again to Google holidays in Italy - much to my other half delight!

I thoroughly enjoyed reading Cesca and Sam's story in Summers Lease and hope it's not the last we hear of them as I look forward to more from the Shakespeare sisters.

Summers Lease is the perfect book for a summer escape!