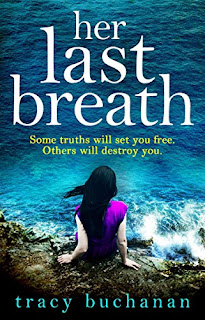 A girl has gone missing. You’ve never met her, but you’re to blame.
FROM THE #1 BESTSELLING AUTHOR OF MY SISTER’S SECRET AND NO TURNING BACK
Food writer Estelle Forster has the perfect life. And with her first book on the way, it’s about to get even better.
When Estelle hears about Poppy O’Farrell’s disappearance, she assumes the girl has simply run away. But Estelle’s world crumbles when she’s sent a photo of Poppy, along with a terrifying note: I’m watching you. I know everything about you.
Estelle has no idea who’s threatening her, or how she’s connected to the missing teen, but she thinks the answers lie in the coastal town she once called home, and the past she hoped was long behind her.
Estelle knows she must do everything to find Poppy. But how far will she go to hide the truth – that her
perfect life was the perfect lie?

Her Last Breath is a great novel that will keep you gripped throughout.

As Tracy does so well, we are treated to the main thread of the story but at odd chapters there are extracts from the culprits point of view.

Estelle Forster is an up and coming chef who focuses of clean, pure ingredients and eating and the book starts with her hosting a dinner party where conversation is focused on two key events. The first being Estelle's debut book launching and the second is the mention of a local 15 year old girl going missing.

Not much is said about the girl other than they hope its just a stroppy teenager who has run away, but the following day when Estelle recieves her weekly bucthers delivery, there is a polaroid photo enclosed addressed to 'Stel' - a name associated with Estelle's past that she would rather forget.

What follows is as very detailed back story for Estelle, who was passed from foster home to foster home as her birth parents were more interested in drink and drugs than looking after their own daughter.
Estelle eventually settled in the little coastal village of Lillysands, with foster parents Autumn and Max Garland, their son Aiden and Alice, another girl being fostered.

As Estelle recieves more and more of the polariod photos and threatening notes, it becomes clear that the young young gone missing - Poppy - is the baby Estelle gave up for adoption, the same day that Alice took her own life, fifteen years ago.

As Estelle returns to Lillysands to inform the biological father he has a child, strange things start to happen and alongside Estelle searching for Poppy, we learn more about her time at the Garlands and the events surrounding Alice's death.

Her Last Breath was well written and kept me guessing throughout - just when I thought I had worked the plot out or figured why Alice had jumped, something else would happen to doubt me and change my mind.

Although Her Last Breath was an enjoyable read and held my interest, I have to honest though and say that the outcome wasn't quite what I expected and did leave me a little flat.
However if you are looking for an intriguing book that has plenty of twists and turns, then Her Last Breath is definitely one for you!