I'm delighted to be talking part in the blog tour for Julia Williams' 10th - yes 10th!! -novel, It's A Wonderful Life, which is published by Avon.

For today's stop, Julia has very kindly offered to share her favourite festive movies with us, and we would love to know what your's is too so please comment below. 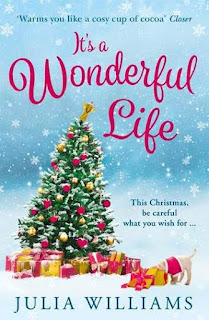 Christmas with the family. Cosy, relaxing…and a total nightmare?
Driving home for Christmas, Beth has everything she wants. The kids and the house, the career and the husband. So why is it that when the New Year comes, she can’t stop thinking about her old college boyfriend?
Her husband Daniel is tasked with bringing a struggling school up to scratch, but when family life catches up to him, can he be a good father and a good teacher at the same time?
Beth’s sister Lou has just been dumped…again. Single and childless, she can’t help but be jealous of her sibling’s success. But is the grass really always greener?
It’s a Wonderful Life is a heart-warming novel about the lives that could have been, and what happens when you start to question the choices you made…

Ah, Christmas. Where would we be without fighting the family for the television control? There’s always something someone doesn’t want to watch. But never fear, here’s my definitive Must-Watch films for the festive season, some old, some new, but there should be at least one in here that everyone can agree on...

1 The Wizard of Oz

To anyone over the age of 45, Christmas isn’t complete without a viewing of this family favourite. (HEY, we grew up with three channels and it was on every year). However, it’s a film which still has appeal for a modern audience, and given the popularity of Wicked, there’s still room for modern families to revisit the charming story of Dorothy, Scarecrow, The Tin Man, The Cowardly Lion (my favourite character) and enjoy the old classic songs for the umpteenth time.  And where better than to watch it in the company of your nearest and dearest? After all, there is no place like home...

Always a firm favourite to those who grew up in the eighties, this is a story which never loses its appeal. McCauley Culkin never ceases to be cute. Joe Pesci and Daniel Stern, never stop being funny. It’s a film which makes you laugh out loud however many times you see it, and you’d have to be a complete  Scrooge not to feel touched by that heart-warming ending. What’s not to love?

For those without an emotional bone in their body (do such people exist? Apparently they do) a bit of 90s mindless violence is just the ticket. Bruce Willis’ solo fight against Alan Rickman’s baddie to save a bunch of hostages, and get back together with his Mrs still pulls its punches. Snow, fist fights, Bruce going it alone, getting the girl - and all done and dusted by Christmas Eve. It’s the perfect Christmas movie for those who don’t do soppy. And even those who do, can always enjoy seeing Bruce at his very very best…

However, for those for whom Christmas isn’t Christmas without a chance to get gooey at least once, I offer you The Holiday: a near perfect rom com in which career focussed Cameron Diaz swaps houses for the Christmas season with jilted Kate Winslet. They both find love in unexpected places, and it’s a wonderful, touching and fabulous film. But be prepared to get your hankie out!

This is going a bit off piste, but I saw the original film during a Christmas holiday, and for me, the excitement Star Wars offers is what Christmas viewing is all about. But it has to be the ORIGINAL three movies as they are just brilliant. (Although I might let you have the third prequel). I am particularly fond of Princess Leia’s sassy no-nonsense approach to destroying the Empire and not needing help from the boys to do it. Star Wars is a must for SF nerds (that’ll be me then) and the good news is with the revival of the franchise there’s plenty more to come. So we’ll probably be watching Star Wars for many Christmases to come!

If Star Wars is just too out there for you at Christmas and you REALLY insist on seasonal films then Frozen is a must. A great modern feminist story, about sisters and friendship. A frozen heart, a great baddy, a cute snowman called Olaf, and true love saving the day in a way you don’t imagine, this is fabulous festive viewing. So, get your pjs on, bring out the hot chocolate and get cosy on the sofa...

7 The Woman in Black

True love and Disney cartoons are all very well, but Christmas wouldn’t be Christmas without a ghost story to complete it, and The Woman in Black is a ghost story par excellence. Granted watching Daniel Radcliffe play something other than Harry Potter takes some getting used to, but you’ll soon be caught up in the creepiness and suspense of the house haunted by the mysterious woman in black, whose appearance generally presages doom.  I’ve watched it three times now, and still it makes me jump...

8 The Nightmare before Christmas

If you’re not so keen on scares, but enjoy a bit of Tm Burton gothic quirkiness, A Nightmare before Christmas is just great. Telling the story of how Jack Skellington (an unlikely hero given he’s a skeleton, but a deeply affecting one) gets fed up with always being in charge of Halloween and decides to kidnap Santa and put on a Christmas no one will ever forget, it’s by turns, funny, moving and very gothic. You may never look at the presents under the tree in quite the same way again...

Ok, ok, maybe gothic weirdness isn’t for you, so for utter cuteness and the perfect way to end Christmas Day, I give you Elf. A film I only saw for the first time this year, but will now be watching over and over again. Will Ferrell’s utterly clueless Buddy, who doesn’t know he is human, turning up at his real dad’s house and trying to fit in is just genius. Again, touching and funny by turns. I cannot believe it took me so long to see it!

And finally… it had to be really, didn’t it? The story of how George Bailey is so distraught he plans to take his life on Christmas Eve before being talked out of it by an angel called Clarence who has to earn his wings, is fully deserving of the word classic. It’s a fabulous film, with a powerful message, and a really feel-good ending. And in case you’re wondering, I haven’t stolen the plot for my latest book. I would have done, but I  already used it in Last Christmas…!

Thank you Julia for sharing your favourite Christmas movies with us - I hope the GiFs are OK?!
I feel it's only right that I end this blog post by sharing one of my favourite's with you -  remember to let us know your's in the comments below!!

I will warn you now that tissues are required for this one.
Jack Frost is more dedicated to his band than his son Charlie, and is forever breaking promises. When he dies in a car crash, he returns as a snowman to put things right between him and his family before leaving them forever.